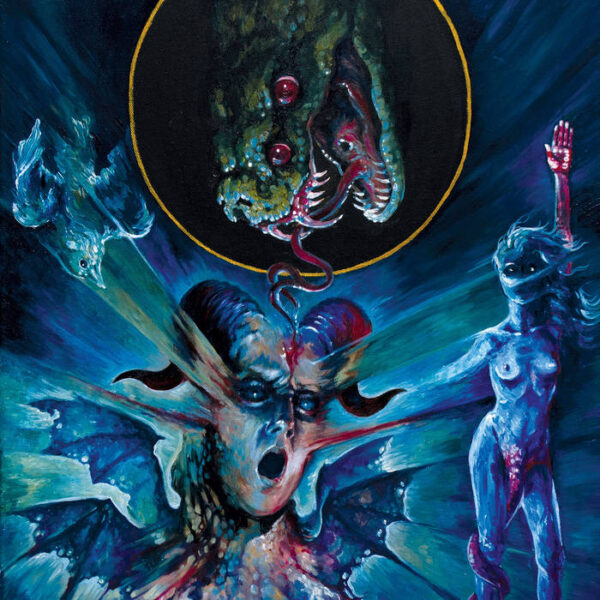 Even if Asthâghul, the man behind blackened death metal project Esoctrilihum, were only of middling ability in song-writing, musicianship and story-telling, I’d still be blown away by his work ethic: “Dy’th Requiem for the Serpent Telepath” is Esoctrilihum’s sixth album in four or five years of the project’s existence. As far as I can tell – I haven’t heard all of Esoctrilihum’s output – these albums are very lengthy affairs averaging about an hour’s worth of experimental and highly individual horror-filled Lovecraftian black / death metal fusion. Esoctrilihum’s last album “Eternity of Shaog” featured an eclectic choice of acoustic instruments and progressive rock influences in amongst the black / death epic bombast; this new work has less folk influence but pushes much more into melodic prog-rock and symphonic metal while retaining the core black / death style and the eccentric occult vision that underlies the maximalist music and extreme, often cartoony-looking album front-cover art.

Divided into four sets of three songs each, the album tells a tale of life, death, transformation and rebirth of the central serpentine character Telepath. Right from the start with opening track “Ezkikur”, listeners can tell this work is going to be complex and heavy-going for them as this song alone incorporates epic blasting blackened death and doom metal styles, plenty of orchestral synth wash and melody, violin and plenty of cold ambience. The atmospheres are lush and alien with a distinct decadent feel and the depth of dark mood can be immense thanks to the juxtaposition of hard crunchy extreme metal grit and droning orchestral music. Vocals vary from black metal to death metal, nothing really remarkable there, but no matter how different the musical elements and styles are on “Ezkikur” and on the tracks that follow, everything including the vocals gels together so well and seamlessly. The main new feature is the inclusion of doom metal which allows other aspects of the music, especially the frigid atmospheres, the alien space horror psychedelia and the melodies, to come much more to the fore.

It’s my impression that the second half of the album is much better than the first with more brutal death metal music, slavering reptile vocals and lively energy, and from this point on the plot around Telepath thickens so folks could just cut straight from “Ezkikur” and “Salhn” to seventh track “Dy’th” and follow the snaky one’s life-cycle from there. There are more contrasts in the music between tracks and fewer complicated metal / non-metal fusions which make listeners’ journey more interesting if more zigzag between one genre and the next. With less padding, the songs are easier to follow and the mood seems to flow more easily. The standout tracks in this part of the album are “Zhaïc Daemon”, a batshit mindfuck of hyperfast blast-beat percussion, cold-blooded crushed-rocks vocals, unrelenting guitar grinderama and demented orchestral synth backing; and “Xuiotg” using Middle Eastern folk music influence, insane blast-beat rhythms, church organ sounds and cold ambience to create a truly terrifying alien soundscape. Some tracks in this part of the album are also pure instrumental pieces dominated by piano and orchestra or violin melodies.

In the hands of a lesser artist, this whole work would just manage to hang together and mystify its audience with a confusing set of messages. Asthâghul is no lesser artist though: he combines his skills as a song-writer, musician and imaginative story-teller to convey a very dark and bleak tale of existence and the place and purpose of humanity in a universe not only indifferent to it but even hostile to its presence, with a musical soundtrack filled with the strangest sights, the most extraordinary visions of decay and malevolence, the most alien and frigid atmospheres, and insinuations of the presence of the most chillingly inhuman entities. The only problem I have with the album is that it does seem top-heavy with the slowest, doomiest and the less lively music coming first – though I suppose this is to create and build up the world around the Telepath character – while the more interesting and energetic work, streamlined yet still varied, is concentrated in the second half of the album.

At this point in his career with Esoctrilihum, Asthâghul seems incapable of doing anything wrong but he might be advised on future work to trim down the orchestral synth bombast and always remember that the blackened death psychedelic space horror vision comes first.