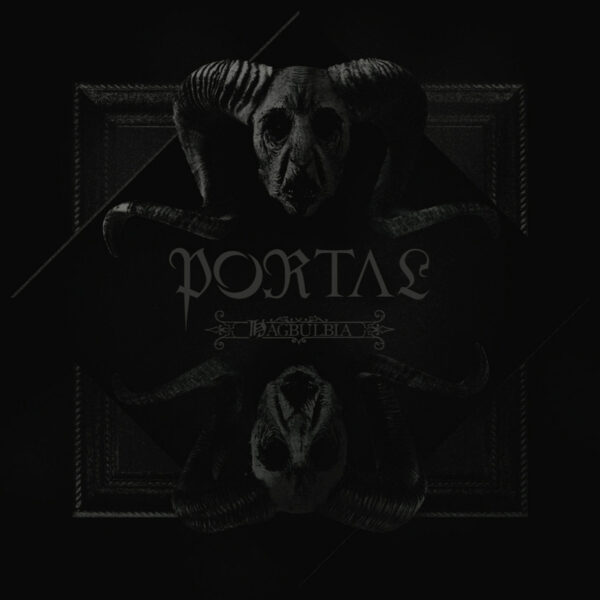 Crikey, what a surprise … these Australian maniacs released not one album guaranteed to floor most people with the most insane soundtrack-of-Hell music alive but TWO albums guaranteed to floor most people et cetera on the one day (28 May 2021) … I just wonder who the lucky birthday boy or girl is, who gets both these albums as presents. Described by the Portal musicians as the “paranormal companion piece” to the apparently normal “Avow” (which to most people would sound already very paranormal), “Hagbulbia” is a much noisier beast, deeply atmospheric and incredibly bleak and despairing. Any doubts people had about Portal being more than just an experimental death metal can be laid to rest – Portal all but toss aside anything resembling death metal at all (well, they preserve the creepy swamp-monster vocals early on) and become what their name had always been leading them to … their music is truly a portal to the most incredible and original if dark and desolate sonic dimensions, surreal and absolutely mind-blowing.

The fun – or the torture – begins with a distorted guttural spoken-voice message from vocalist The Curator leading into the dense cacophony of factory-ambience percussion and hysterically shrill tremolo-guitar scrabbling over a background of layers of hellish noise. The vocals are so distorted that they often merge with the noisy guitars and listeners gain an impression of an organic albeit monstrous being having combined with non-organic forms animated by malign entities to form a constant shape-shifting beast. Songs are not very different from one another in atmosphere and tone – this might be something of a drawback for the album, as the music can be murky, shrill and dense and thus inaccessible to listeners wanting a motif or riff to hang onto – and the album is perhaps best heard as an excerpt of a continuous soundtrack to an imaginary film of the bleakest, most blizzard-swept cold-Antarctic-desert soundscapes human mind can conceive. The closest that any one song comes to conventional death metal is “Weptune” and even then only for a short while before clouds of noise, slow industrial beats and overhead bass drones drown out anything resembling melody or rhythms.

The most terrifying moments on the album come on the closing track “Hexodeus”, a screeching ghostly piece of cold withering sandblasting atmospheres, watery-wave dissonant guitar chords, dry death-rattle ghost vocals backed by swirling noise that may reveal choirs of gabbling demons within and plenty of ambient background derangement. In its later moments the layers of noise seem to become more prominent (or maybe my brain cells are making more sense of them) with the vocals moving in and out of the noise storms, the guitars becoming ever more pointillist in their mania and lead guitar adding an extra dimension of unrelenting micro-sonic insanity. The music cuts off abruptly as though we’ve come to the end of available tape but listeners will quickly realise that is to be expected – this album captures but a small part of a soundscape that has no end.

As if the music were not already nightmarish and spectral, I’d have liked to hear something that suggests existential pain and torment in the music – there are indications that voices of damned souls may be present along with The Curator’s lead vocals but I think the band could have played these up more, to give an extra, more complicated dimension to the music. An element of personal suffering might have made the music even darker than it already is without having to change anything else on the recording.

As a much more noise / dark ambient-oriented recording, “Hagbulbia” doesn’t have the structural variety that its twin “Avow” has, and parts of “Hexodeus” especially needs some backbone and muscle as the continuously blowy noise risks sounding thin and bland the longer it continues. Perhaps the two albums are intended to be played simultaneously: there are a few minutes separating the two albums in length. What an unbelievably demented soundscape experience that would be!