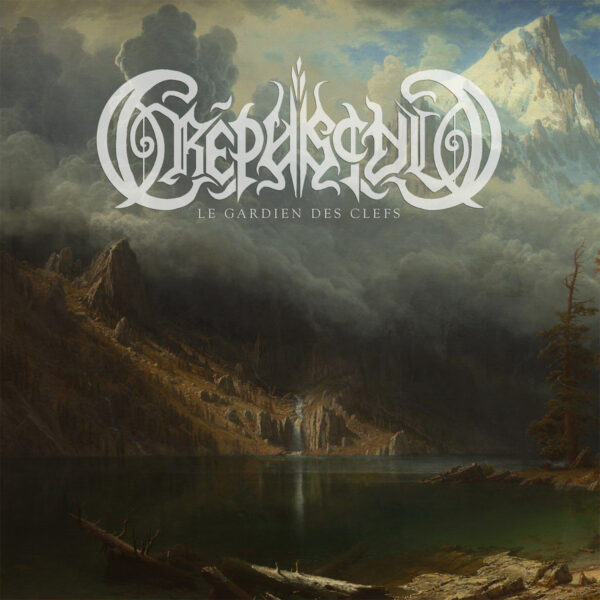 Between first album “Néant” and its full-length follow-up “Le Gardien des Clefs” (in English, “The Keeper of the Keys”), nearly a decade was to pass for Quebecois solo black metal act Crépuscule. In the meantime, Crépuscule musician Bardunor kept busy guitaring, vocalising and drumming for other Quebecois BM bands Hiverna and Monarque, and the experience and capabilities he brings to Crépuscule from these bands are plain to hear. Songs boast very distinct and memorable riffs and a clear-toned sound with a fuzzy edge giving the music the raw sharpness it needs. The production is clean and clear as well so that all instruments can be heard. The drumming is adequate for its time-keeping duties without being outstanding but the guitars and sometimes the beautifully atmospheric synth melodies are the clear stars of this show. The singing is bloodcurdling enough given the album’s theme which suggests a quest involving battle and the solving of mysterious puzzles that lead to further adventures culminating in a final peril that justifies everything that has occurred before. Imagine these quests and journeys taking place in a wild landscape of craggy mountains and cliffs, carpeted by silent pine forests, all beset by long snowy winters, and you realise the music is a suitable soundtrack with its mix of dramatic pop-catchy tunes, rough-hewn singing and evocation of wonder at the vast (if perhaps imagined and stereotypical) landscapes stretching out to the far horizons under cold northern subarctic skies.

Technically the album is good if quite minimalist in style, being restricted to two layers of tremolo BM guitar, bass, percussion and vocals, with some keyboard-generated atmospheric background. The songs are well written and performed though no particular song really stands out above the others. “La clef noire” boasts a strong folk metal melody early on and some thrilling passages of shrill tremolo instrumental scrabble but the folk metal aspect doesn’t last long enough to make this song something to savour over and over.

I can understand keeping the music minimal in its choice of instruments to emphasise the melodies and emotions, and to give prominence to the vocals and lyrics, but with so many BM bands across the planet writing and performing songs of adventures, quests and battles in an imagined past, the danger here for Crépuscule is that this second album becomes no more than a generic example of its genre and subject matter. An extra instrument, preferably acoustic and perhaps more associated with folk music genres than with current Western styles, might have added individual flavour to the songs here and made the album much more distinct and maybe even a bit eccentric.