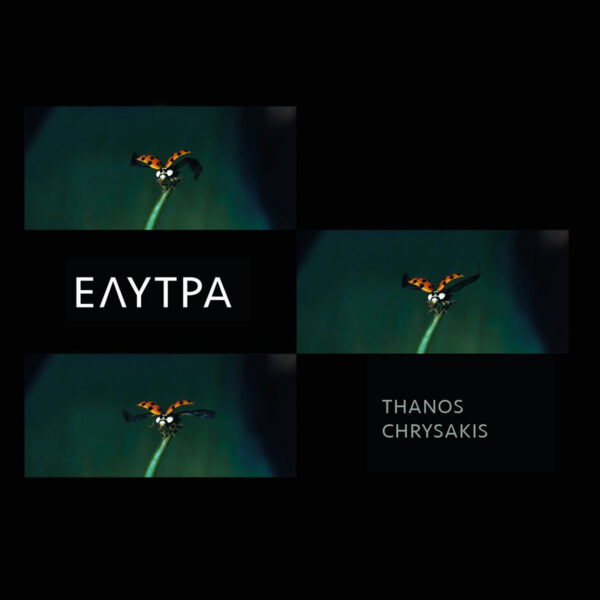 We heard the Athens musician Thanos Chrysakis in 2011 with his Subterranean Sky concoction for Aural Terrains, and he also shone on the Syneuma record playing as part of an improvising trio with his “inside piano” work. Thanos is here today with a solo record Elytra (AUF ABWEGEN aatp82), seven pieces of music which I assume are a form of electroacoustic composition. He was inspired by the sound of crickets chirping; he gives a brief explanation of how they make that sound, refers to the entomological term for their protective fore-wings (elytra), which in some species are quite tough and leathery, and describes how a cricket’s burrow can act as a resonant chamber for the sound they make. Despite this rap about crickets, the insect on the front cover appears to be a ladybug – but no matter, I’m sure they have elytra too. After all that, it seems that the record contains no field recordings of crickets or insects at all (as you might reasonably expect), and instead Thanos Chrysakis simply wishes to emulate this natural phenomenon through his own artifice and imaginative creations. Accordingly, he creates very layered and busy sound-canvasses, teeming with detail, event, and life. Small percussive sounds slug it out with delicate swarms of velvet ether shrouds. He advances this idealised pastoral view with poetic titles, such as ‘Tortoise Pilgrimage’, ‘Coral Aether’, and ‘Delphic Maxims’, suggesting a dream-like take on natural themes. It’s impressive how he holds our attention with these long-form, discursive statements, where the centre of focus is unclear and everything becomes a fluid continuum of sound. Chrysakis never short-changes the listener, and there is a lot to listen to on this engaging and aesthetically pleasing record. Jetzmann is Horst Petersen. In Hamburg he hosts a radio show, but he’s mainly known for producing musics in a dance setting, and today’s record Use The Air (AUF ABWEGEN aatp78) is a collection of pieces he’s been involved with, representing a sample from the last 15 years. The works were created for choreographers such as Jenny Beyer, Begum Erciyas, Chris Leuenberger, Ana Muller, and others. However, the creator is at pains to stress that this is nothing like conventional dance music and even the relationship of his music to these very contemporary movement artistes is complicated, hard to sum up; the pieces evolved in a very sporadic fashion, rather than through scoring, and involved improvisation, informal rehearsals, theare spaces, noise workshops, and DJ sets rather than a more orthodox ballet-type scenario, or a Merce Cunningham setting. I suppose all of this accounts for why the music is so very unexpected; for one thing, hardly any rhythmical pulse to speak of, and so utterly abstract that there is little that a conventional dancer could use for interpretative purposes. As such, Use The Air emerges more like ultra-minimal electronica music, stripped of just about everything (beats, melodies, pulses, textures) that might remotely connect it to glitch or techno, and content to breathe the rarefied air of electronic art music in the Asmus Tietchens mode, while still insisting on its connection, however tenuous, to the dance it was provided for. Jetzmann is well aware that if we buy this record, we can’t see the dance, but this fact has guided his selection.