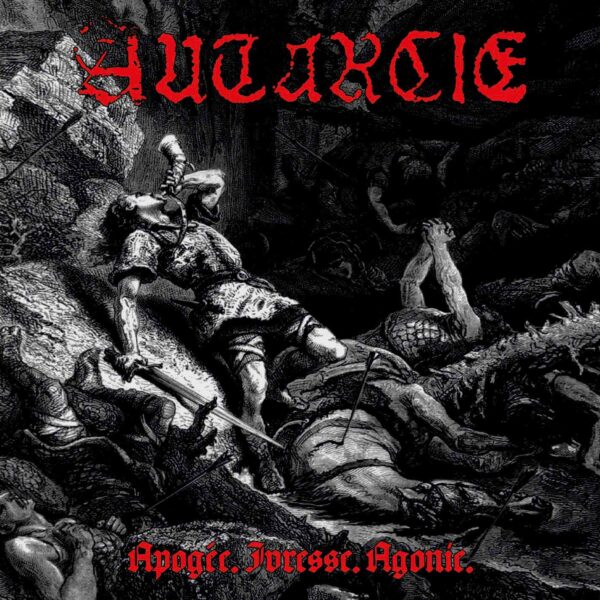 A stalwart of the black metal scene in Besançon, in eastern France near the Swiss border, since forming in 2006, Autarcie has notched up a solid discography with current album “Apogée.Ivresse.Agonie” being its seventh. Vocalist / guitarist Nokturn has been Autarcie’s core member who has seen a few musicians come and go, and the project currently features drummer Skogsvandrer. So even though I’ve heard a couple of Autarcie’s past albums, I suppose I had better be careful and not assume the band is still the same old-school melodic / folk BM band I heard on recordings like “S.I.D.A. (Sédition. Isolement. Déliquescence. Autarcie)”.

Well, what do you know … Autarcie may have a better, more polished sound with more atmosphere and samples of mediaeval battle noises but Nokturn’s singing is still gruff and gravelly and he still has an ear for often catchy melodies and riffs. The production on the album may be better and clearer than it was on early recordings but it’s still dark and gives the music a raw feel. The music often has great, almost epic drama but its style is very streamlined and minimalist, limited to guitars, bass, percussion, synthesisers (on some tracks) and samples. The pace of the music varies but is usually fast, the tremolo guitars whirring away like a mass of hornets and the drumming sticking to its time-keeper duties; the result is music that may not be flamboyant and highly individualistic but instead is focused and energetic as a vehicle for Nokturn’s lyrics which among other things revolve around the history of the Sequani, a Celtic tribe that lived in the area of Bourgogne-Franche-Comté (Autarcie’s home country) during Roman imperial rule.

As the album progresses, the drumming starts to show more individual flair with plenty of cymbal and hi-hat work, and the music opens up with bursts of folk melodies on clean-toned guitar (middle track “Regnorum Francorum” being prominent in this respect). The singing seems more intense, raspy and even bloodcurdling at times. The mood becomes less subdued and melancholy and strong nostalgia are very noticeable on songs which also include more folk influences. The songs become longer, culminating in the title track that almost hits 11 minutes in length, featuring as it does memorable tremolo guitar riffs that thrum with defiant energy, a flash of scourging lead guitar, rock-out grooves and lively drumming with plenty of cymbal work. The emotion, love and the connection the Autarcie musicians have with the history of their region, and their desire to communicate what they believe in, are strong and these feelings drive instrumental music that sometimes threatens to upstage Nokturn’s lyrics in this final song on the album.

Other bands may work up epic bombastic recordings of imagined and romanticised past history of battles, victories and loss of life, and may gain bigger audiences but Autarcie prefer to deliver their drama through aggressive and vital music. This album may not be very flashy initially but it starts to improve with “Regnorum Francorum” and reaches its pinnacle with the title song. Repeated hearings reveal technical prowess and memorable tunes in these later songs. Short ambient instrumentals around the album suggest a past historical drama being played out for us to learn from past generations’ mistakes and lapses, to know our place in the history of the area where we live, and to find purpose from our connections to the past.