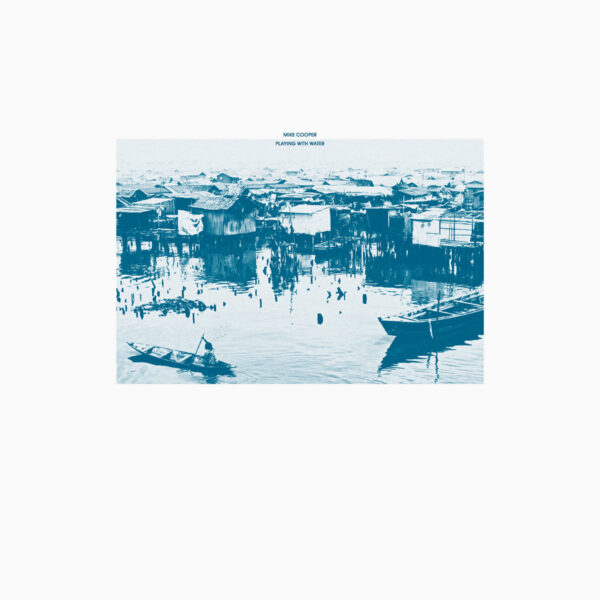 Latest solo record by the UK guitarist Mike Cooper is Playing With Water (ROOM40 RM4117). We have heard this exceptional fellow before on a couple of records for Linear Obsessional, which were more or less in the area of free improvisation, representing Cooper’s maverick take on the genre resulting in largely uncategorisable and very discursive free playing, where even traces of his folk and blues roots were hard to discern. There was also White Shadows In The South Seas, also released on Room 40, which exhibited Cooper’s long-standing love affair with the Pacific area and Philippine Islands, an instrumental album which it was possible to align with the 1950s exotica of Martin Denny and Les Baxter.

Today’s record might appear to be in the same vein at first gazoon, but in fact there’s a more troubling theme underpinning it – the threat of global warming. It’s a topic that’s been preying on Mike Cooper’s mind for over 20 years now, and if you want to trace its lineage, you could do worse than start with the 1999 album Kiribati which he self-released on his Hipshot CDR label. It was explicitly dedicated to the people of that nation in the Pacific Island, as he shared their concern with rising sea levels which affected their low-lying homesteads. Since then Cooper has not only travelled extensively around the Pacific, South-East Asia and the Caribbean, he’s released six other records lamenting this ecological disaster-in-waiting, and Playing With Water makes the seventh; his sleeve notes refer to numerous other parts of the world facing flooding and storms, brought about by melting icecaps and changes in the weather, and there are pessimistic track titles such as ‘The Drowned World’ and ‘Wetropolis’ to drive home the message. That last one refers to a vision of the future where we’re all living on islands, in a kind of Kevin Costner Waterworld fantasy come true.

We also ought to add that Cooper was directly inspired by the works of the Australian travel writer James Hamilton-Paterson, who wrote a book of this title in 1987. Thus, while it’s possible to enjoy this record as a set of subdued and limpid instrumentals, there’s no escaping the ecological message which informs its somewhat melancholy and rue tone. Cooper’s guitar style is influenced by Hawaiian guitar styles and lap steel playing, but he takes it in such an unexpected direction that these influences are just the starting point. There may also be occasional keyboards added to enhance the delicate mood; there are certainly field recordings, drawn from a number of geographic locales, which Cooper points out are “all places that can look forward to or are already witnessing the Postdiluvian Future”. The field recordings work especially well on ‘Bankocalypse’, producing a sonically rather dense collage that’s more than just music, more than just an audio snapshot, and it evokes a very unhappy picture of the future we are creating for ourselves.

I admire the way Cooper makes his points with any sermonising or political bias, nor is there any need to adopt a shrill tone or froth with hysterical urgency. This is a vinyl release; there was an edition pressed in clear vinyl with a blue aqua swirl. Very good. From 19th October 2020.