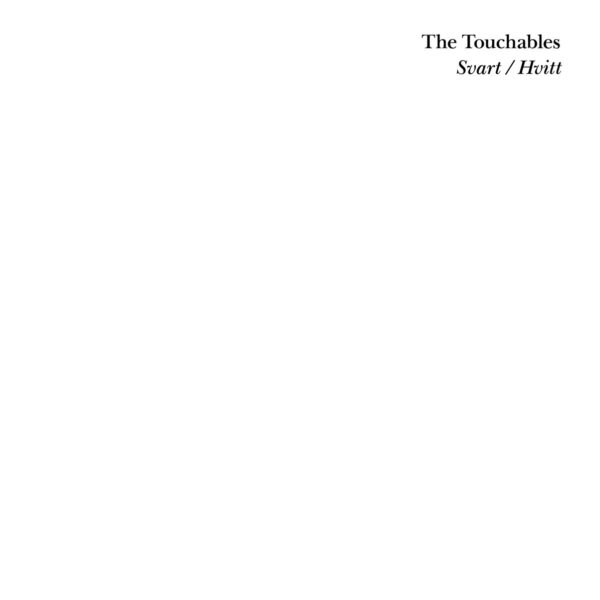 We first heard from The Touchables with their 2019 offering The Noise Is Rest, a very affecting set of pared-down minimalist string-instrument music with much in the way of lower-register groans and scrapes. Since then the duo of Ole-Henrik Moe and Guro Skumsnes Moe have expanded The Touchables into an entire chamber ensemble, and the duo are joined on today’s record Svart / Hvitt (CONRAD SOUND CNRD329) by seven other fine players, including the ineffable Martin Taxt with his microtonal tuba. There’s now extra woodwinds, percussion, and more stringed instruments to further the plan of bringing these cryptical creakings and sighings into the musical universe.

They’ve also taken another conceptual step towards their stark outlook on life, with a plain-speaking title that translates as “Black / White” and an equally uncluttered cover design (by Lasse Marhaug) that makes your table napkin look like a Jackson Pollock painting. This particular work was commissioned for an Oslo concert in 2015, recorded in 2016, and incredibly it represents the debut for this group; I say this as they perform so cohesively and with such gravity of intent, with an assurance that many players would surely envy. I’d imagine a lot of this is due to the clarity of ideas of Ole-Henrik Moe and Guro Skumsnes Moe; like many of their contemporaries, they too are working in this area somewhere between composed music and improvised music, but they evidently have their own particular vision of what this means. It’s a music of possibilities, for sure, but also kept under a very tight rein, with a lot of discipline in the sounds and the movements of the players, be they hitting percussion instruments, bowing a string, or blowing a wind instrument.

The other aspect to stress is the fostering of trust and respect between the players, creating an environment where everyone is obliged to be quite pro-active in listening to their brethren and responding accordingly. Further hints to the working method, found in the press notes, suggest there is much sharing of the creative compositional process, and unusual means of notation, along with imaginative ways of passing on instructions to each other. It makes you wish you could be there through the development of the work, which I’d imagine was a very lengthy cultivation. Ultimately, this Svart / Hvitt is something of a slow-burner for the listener, with delayed payoffs, slow motion gestures, a gradual inching towards the goal, and a rather strange formlessness in evidence, with the gaseous billows of sound and abstract, sullen rumblings. But there is also much to savour along the way, in the way of “low frequencies” and “thick textures”, with this full ensemble generating a rich range of audio sensations in among its carefully-controlled array. The ensemble can produce harmonious blends where no single instrument stands out, creating a very pleasing result, yet there is also space for remarkable dynamics and acrobatic executions, particularly on the stringed instruments.

In terms of creating that bond of shared respect between the players, The Touchables are perhaps not too far apart from Christian Meaas Svendsen, fellow Norwegian who also happens to play the bass, who exhibits this nurturing spirit across many of the releases on his Nakama label, and it’s a philosophy which is embedded in the very name “Nakama”. And with their typically Nordic restraint and reserve, The Touchables create a much more natural and accessible form of music than the more exhibitionist and flamboyant antics of the Zeitkratzer Ensemble, much as we love them. From 1st December 2020.