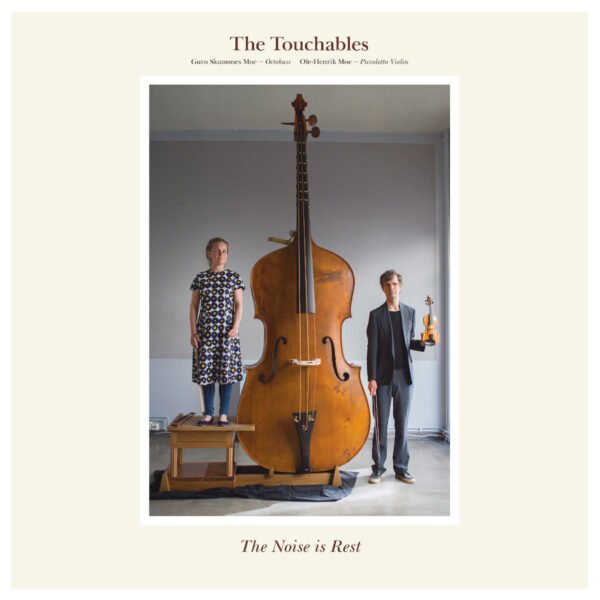 Norwegian string-based music that’s pretty extreme…and enjoyable too, emanating like gaseous solids from the instruments of The Touchables, a duo comprising Ole-Henrik Moe and Guro Skumsnes Moe. We heard Guro Skumsnes Moe some time ago on the fab Harpoon record made by Sult (with Lasse Marhaug) which was (like today’s offering) a real object lesson of what could be done with a contrabass when lower-register vibrations are required. There’s also the raucous avant-punk band MoE which she leads, whose Tolerancia Picante is a spicy doubloon. Norway can be justly proud of this all-rounder. I find she’s also done a movie score and composed for the vocal group Oslo 14. The violinist Ole-Henrik is nobody’s surly rug-rat, either, and is a composer, improviser, rock group performer, and has appeared in numerous radio and TV broadcasts. Any Nordic man who studies under Xenakis gets a drink from my sack of limes any day of the week.

Together, this pair have put together scrape and saw to realise The Noise Is Rest (CONRAD SOUND CNRD328CD), which on early outings I could enthusiastically regard as a tiny masterpiece in its studied realm of cloudery and vibrational aspect. This doesn’t appear to be conventional improvised or composed music, and instead the performers seem bent on pushing themselves to one extreme or another, in terms of sounds made and spiritual / intellectual states attained. There’s a certain courage in surrendering to a sound and letting the force lead you by the long hairs to wherever it may traipse, seeking whom it would devour. Part of this “extreme” intrepid explorer approach is naturally down to the selection of instruments – not your standard cigar-boxes. Ole-Henrk plays something called the piccoletto-violin, evidently a specialist instrument that enables the production of very high frequencies, but in a way that the normal violin cannot manage. They somehow come out much more clearly. As to Guro Skumsnes Moe, she plays the octobass, which is about the most extreme form of contrabass known to man. Apparently only seven of these devils are in existence in the known musical world, and for some reason it never really took off with composers or musicians ever since it was first built in the mid-19th century by some French loon. Perhaps the extreme difficulty of playing this beast, which can grow to a height of nearly 12 feet, might account for this lack of engagement. You have to play it with pedals and levers rather than the conventional manner.

Well, I’ve just spent 155 words telling you what is plainly obvious if you simply look at the cover photograph. This may look as poised and mannered as a still from a movie by Wes Anderson, but it’s the real deal. As to the incredible music and incredible sounds, there’s considerable variety on offer here, though I’ll award the golden mille-feuille to ‘Blackout Lighthouse’, 7:11 mins of desolate starkness that you could use to bleach the wallpaper and still have enough left over to wrap a dead fish. However, the entire album is fabulously great with nary a duff moment across eight highly evocative tracks of minimal landscape painting and meditational non-drone, with textures as edible as raspberry-flavoured sandpaper and discordant anti-harmonics arising at every turn, sufficient to rotate the weather-vane through 90 degrees. It’s not inept, I think, to compare the sound they make to that of the ocean or the wind on a deserted Nordic island. The sound just transports you to this lovely remote spot and allows you freedom to think, breath, stretch out. Very recommended. From 2nd August 2019.