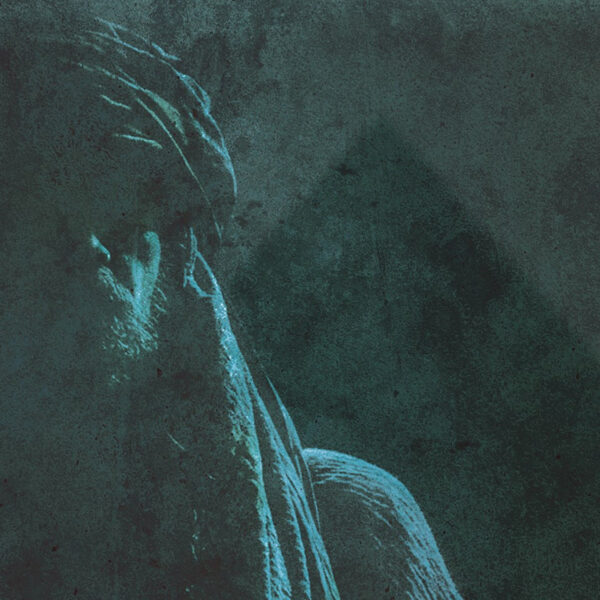 Originally released digitally through Svart Lava Records in 2018, “Antediluvian” now has another lease of life on cassette and vinyl through Tartarus Records. Brainchild of Rotterdam-based musician Jason Köhnen, Bong-Ra performs music within various subgenres of electronic dance music such as breakcore, drum ‘n’ bass and jungle, often crossing with other genres like jazz, gabba and metal. Köhnen actually began his musical career playing drums for Dutch doom metal band Celestial Season in 1991, later branching out on bass for CS in 1996 and starting Bong-Ra in the emerging breakcore scene in The Netherlands in 1997. “Antediluvian”, Bong-Ra’s seventh album, might be considered as both a homecoming and a new beginning for Köhnen in combining doom metal, improvised jazz and electronics. As the album title itself and the song titles suggest, “Antediluvian” is inspired by Köhnen’s interest in ancient civilisations going back to pre-dynastic Egypt (6,000 – 3,100 BC). On all tracks Köhnen plays guitars and electronics with help from Balazs Pandi on drums and guest musicians Colin Webster (saxophone) and Chloe Herrington (bassoon) playing on a few tracks as well.

The first track and the longest as well, “Kheper [Pharaoh’s Serpent]” is a heady brew of ethereal atmospherics, bubbling jazz saxophone, samples of otherworldly nymph vocals and the slowest, sludgiest smouldering-lava doom metal that fries all caught up in its monster sprawl. Stuttery spasmodic sax and similarly sputtering percussion do battle under a dark atmosphere of decaying synth wash and sighing voices. The mood is strangely serene, even meditative even as guitars burn with corrosive frying grind. “Amun [Hidden Chambers]” continues with this eerily dark and spacious sound-world where low moan, piano melody and light yet emphatic drumming with crashing cymbals mark out a steady path through drone bass crumble. A bizarre interlude of jazz piano and cymbals in an airy niche intrudes about halfway through and plays alongside the guitars and groaning phantom voices. Droning synthesiser wash adds an air of pre-apocalyptic decadence.

For the third track “Oon [Precession of the Equinoxes]” the music doesn’t change significantly but the atmosphere definitely feels very different as though listeners have been transported to another, parallel dimension in the album. While guitars and percussion duel continuously, trading cymbal crash and churning guitar grind, the solemn background darkness sighs and breathes with the indifference of one who cares not for the destiny of the universe and its inhabitants. Guitars burn and churn away and the drumming keeps lashing out with rolls and the hissing of cymbals. The sax returns for “Aton [Mind Machine]” as a distant counterpoint to the improvised drumming and continuously grinding steamroller guitars but there are otherwise no new surprises in the music.

For an album featuring a lot of improvised instrumental music, “Antediluvian” feels more ponderous than looming apocalyptic disaster threatening to sweep away early megalithic civilisations and ends up not having a great deal to deliver other than dark doomy atmospheric metal with free jazz touches. The tracks could have been linked up into one meta-track of descriptive chapters about the space they dwell in. What was promised by “Kheper …”, that of a mystical transcendental experience in a doomjazz universe, fizzles out into a roundabout wander with two argumentative guides. I admit to being a bit disappointed, as doom metal / jazz / electronics fusions are few and far between and the world really could do with more of these and other unusual musical fusions.