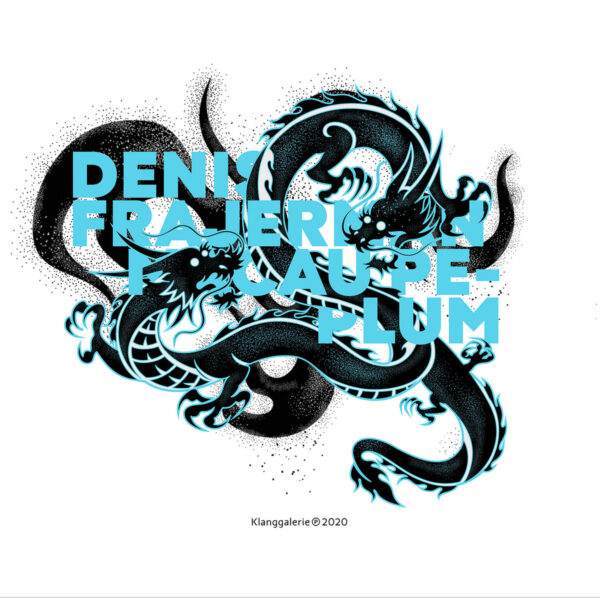 Striking piece of art music from the French composer-musician Denis Frajerman…the CD Macau Peplum (KLANGGALERIE gg341) is mostly a reissue of the 1999 album by this name originally issued on the Noise Museum label, but the CD also includes a bonus 20-mins suite ‘Le Voyeur’ from 1996. Frajerman is of course a new name to these ears…I find he was a member of Palo Alto, a French experimental band who started out in 1989 with a cassette for Old Europa Cafe, released many albums with puzzling titles and far-out cover art, and may still be going – their last release was in 2020, and also looks like a pretty heavy-duty item, featuring guest player Richard Pinhas and paying tribute to the philosophy of Gilles Deleuze in music.

Frajerman has had a respectable innings as a solo artiste himself, beginning with the Mandibules cassette in 1997 for Organic Tapes. It seems he’s keen on the oratorio form, and likes to add spoken word and operatic segments to his compositions, a strategy which reflects his literary leanings and interest in story-telling. If there is a story to Macau Peplum, it’s well-nigh impossible to make it out on first spin, and the cryptical semi-surreal track titles don’t help me much either, but it’s all incredibly intriguing and fascinating. What emerges is strange, baroque and inexplicable music, reminding one in places of Art Zoyd and similar high-minded French proggers…evidently very carefully composed, following ideas that are clear to the visionary composer’s mind. To help realise his vision, he’s joined for the Macau Peplum suite by a small chamber ensemble of players who add woodwinds, voices, percussion, strings, and a computer; Frajerman himself plays many instruments himself, and supplies the electroacoustic dimension with his bank of tape recordings. The music itself has at least two modes – an upbeat one, which clonks and trundles along in an endearingly rattly fashion much like Pierre Bastien on springs; and a more mysterious, foggy, Edgar Allen Poe mode, which explores murky gardens and misty mountainsides with all the precision and paradox of Rene Magritte’s two good eyes.

By now I’m thinking that this ought to have been released as a gatefold LP with a bound-in book, 12 x 12, packed with weird photos or drawings and reams of indecipherable texts, plus intellectual footnotes referring us to obscure French philosophers or non-existent books which only existed in alternative histories. Instead, we have a CD digipak which is elegant and fine, but explains very little. Perhaps, assuming that we want to get under the skin of M. Frajerman and peep inside his brain-pan to find what scuttles there, we need to gain some understanding of the work of the writer Antoine Volodine. Frajerman made one album Les Suites Volodines (1998) which directly references the work of this author, whose books have not graced my shelf and whose work is unknown to me. He’s a French modernist (half Russian, in fact) who has published some 20 novels under this name, and others under various pseudonyms; the Evergreen Review, who have interviewed him, seem to think he’s an exemplar of post-exoticism, a genre which is not one I’ve encountered before. The press notes to this CD mention that Volodine is interested in witchcraft, shamans, haunting atmospheres, and that he has a wicked sense of humour – preoccupations and qualities shared by our French musician.

Listening again to Macau Peplum, I can start to discern the “haunting” side of it for sure, and in fact he’s arguably more original and more successful in this area than any of the upstart types who claim “hauntology” antecedents for their bland ambient drones. Maybe after a few more spins I will start to dig the black humour, too; I hope Macau Peplum doesn’t turn out to be a huge post-modernist joke at the listener’s expense, but I doubt it, as there’s such a strong interest in form, design, ideas, and musical execution of same. Another fine reissue from this Austrian label who bring us some real gems from music’s forgotten or overlooked corners. Arrived 1st December 2020.