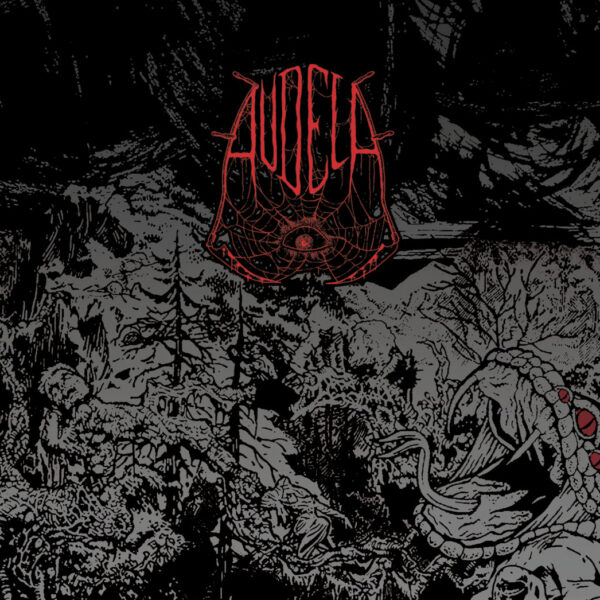 “Sentence”? This debut album from French black metallers Au-Delà perhaps deserves the title of “Novel”, running to a mighty 65+ minutes, but then the title wouldn’t be as absolute and direct. Sure enough, the first time I heard it, I was blown away by the force and power and sheer energy of these musicians. Au-Delà formed in Belfort in eastern France – incidentally they’re from the same region of Bourgogne-Franche-Comté as are BM compatriots Autarcie whose album “Apogée.Ivresse.Agonie” I reviewed a month ago – back in 2013 but released “Sentence” only this year. At least two of the three members of Au-Delà have been involved in other bands over the past several years (and may have joined Au-Delà well after 2013) which would help explain why the band so far has a small discography.

Unlike other French BM bands who use the genre as an archives for folk music and exploring the histories of their local regions, Au-Delà play directly to their audiences with full-throttle melodic BM. Their style has a strong punk attitude along with folk influences in their riffing and the melodies used. At the same time the trio appear very aware of what their audiences want and the music can often feel a little commercial, in an alternative mainstream way. While the band plays fast and aggressively, and at times the music is very thrashy, the sound quality is actually quite clean and the guitar tones are clear and even sparkling, though they do have a sharp edge. Percussion is fast, attacking and always cymbal-crashingly enthusiastic. The vocals are very much the Real Deal in utter throat-ripping frenzy – I hope a surgical team was close by during the recording of the album. The atmosphere on the album is cold and dark though the musicians don’t make a big deal out of it: it just is, and the music comes rocketing out with amazing clarity and precision.

Being a long album of minimalist-styled melodic BM with most songs employing a similar attacking take-no-prisoners mode and jam-packed with dramatic riffs and folk-flavoured melodies, “Sentence” is perhaps best heard as a collection of songs, though they may all have a theme or concept in common, rather than as a continuous narrative. A little bit of time-out from the constant aggression appears in a middle instrumental piece “Prélude” which gives some idea of what the trio could be doing in a parallel alternative universe: instead of playing BM, they could be messing with tapes, samples and improvisatory post-rock. Indeed, after “Prélude” the band starts to experiment more with its style and sound, notably in “… subdivision …” and even in later tracks like “Fenix” and “Au-Delà” there are little intimations of hard rock, prog rock and atmospheric elements in short instrumental sections, in what otherwise would be sheer tearaway punk thrash BM terror.

The album is a very professionally and energetically presented work with good song-writing and indications that Au-Delà are capable of doing much more than they have shown so far. I’d be very surprised if this album bypasses labels like Season of Mist and Iron Bonehead Productions, it does aim at an alt-mainstream BM audience that welcomes dipping into other genres on occasion.