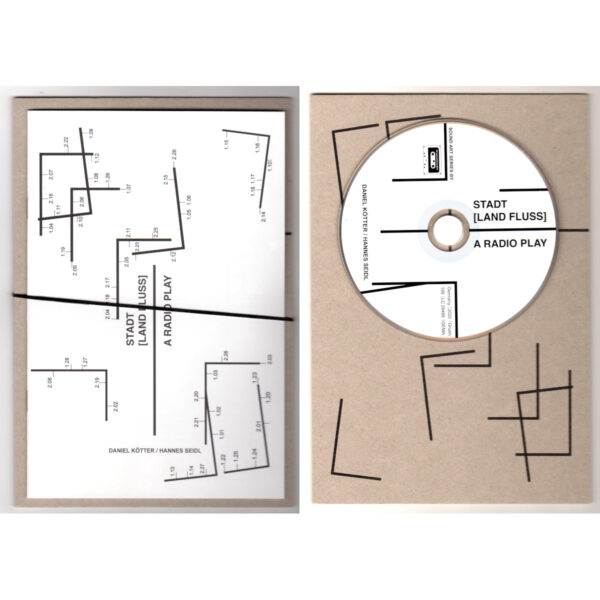 Daniel Kötter and Hannes Seidl have made Stadt [Land Fluss] (GRUENREKORDER Gruen 199), a very intriguing radio drama which lasts for about 42 mins in a single unbroken episode; if you buy the whole package, you get an extensive booklet which reproduces the entire script of the piece, plus photographs documenting the realisation of the work with its many collaborators (about whom more shortly), plus stills from a related film.

Seidl is a German composer who’s a member of the Stock11 art group and the electronic duo dis.playce, and his work has appeared on many European stages. Kötter is described here as a “media artist”, but I find elsewhere that he’s worked in films and music direction, and borrowed from experimental cinema to realise his aims. For Stadt, they’re joined by three other musicians – Sebastian Berweck (pianist interested in electronic music), Martin Lorenz (percussionist with interest in music theatre), and Andrea Neumann, the famed performer of the Berlin “reduced playing” school and member of Phosphor. These three are presumably providing the low-key but texturally rich abstracto-electronica noise in the near background, that helps make this such a compelling listen. The other main contributor is Christina Kubisch, a topnotch sound artist who we’ve heard before on this same label, often with her collaborator Eckehard Güther. Their Unter Grund record was a detailed and well-researched examination of the Zollverein Coal Mine Industrial Complex in Essen, and her sense of engagement with the environment makes her a highly suitable candidate to appear on today’s record.

Stadt [Land Fluss] is less site-specific than that, and is intended I think to be read as a general observation about the condition of “the city” in the 21st century. Everything is in a state of change, bulldozers tear down buildings, modifications and renovations wherever you look; what effect will these changes have? If this is a battle for the soul of the city, who will emerge victorious? What will the future be like? These poignant questions inform the “discourse” of this radio play, expressed mostly through spoken word and electronic sound. The speeches – many of them in English – may have been excerpted from interviews about town planning and the current state of society. I kept looking for contextual information, but the sources aren’t given here. There are also some location recordings and documentary sounds taken from urban areas, but these are (perhaps surprisingly) used very sparingly, and don’t seem to be proving a specific point so much as adding to the general atmosphere of the piece.

In short, Stadt [Land Fluss] is shaping up to be an art-statement, a vague and generalised impression of urban renewal, and one where direct social or political comment is kept at arm’s length. Even the cover art is anonymous; it creates the impression of a very schematic street map, or some sort of specialist measuring grid used by architects, but really it’s just straight lines and numbers. You can derive quite a different impression from reading the booklet’s script, which is laced with many trenchant comments about the subject, ranging from practical and factual statements to more politically-infused and philosophical musings. But it’s not clear who these speakers are, what the situation is, what problems they’re addressing, or when they said it. It’s this that reinforces my impression that Stadt [Land Fluss] is a slightly unfocussed survey of the subject, but this shouldn’t be taken as a negative, and besides being a very interesting listen, it may be making its points in more subtle and oblique ways. From 15th December 2020.