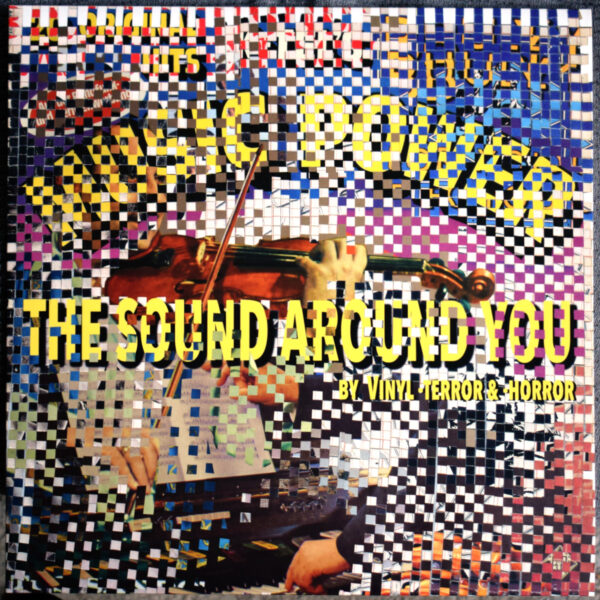 Greta Christensen and Camilla Sørensen are a duo of creator-women from Denmark who trade under the name Vinyl -Terror & -Horror. We heard them some years ago on Le Petit Mignon Vs Le Cagibi, a highly desirable little vinyl artefact with cartoon book cover, and recoiled in amazement at their destructo-creato turntable and sampling collage antics. However, they’ve been active in this area far longer than that and have been performing their actions with records and record-players for nearly 20 years, proud of their smashings and manipulations, putting broken pieces of vinyl together with other smashed objects that don’t really fit.

They’re here today on the LP The Sound Around You (NO LABEL VTH006), a conceptual record of sorts, where the cut-ups of Side A are recreated as scored music on Side B. On the first side, three short-ish tracks of compressed mayhem emerge, drawing on a deliberately ill-assorted and startling mix of musical sources – classical, pop, movie soundtracks, folk music – and combined with that restless technique that never lets the listener fall asleep, interrupting us every second with the sounds of scratches and stuck loops, until any sense of normality is completely overturned. There’s a certain deliberation and care with which these wholly unnatural sound-events are assembled, as if we were seeing vandals letting fly with sledgehammers and chainsaws in a porcelain shop, but doing it as an elaborately choreographed performance with stopwatches and printed directions. After which the results get exhibited as a ghastly Frankenstein vase with broken pieces glued together any which way, mixing Meissen with Crown Derby on top of a Susie Cooper saucer. But it gets even stranger.

On Side B – called the “Instrumental Version” – the exact same pieces are repeated as scored music, played by a small ensemble of talented players and singers, thanks to the transcription skills of George Kentros, who also plays violin. Every squeak, scream, and musical fragment that had emerged from the chaos of broken vinyl is lovingly recreated in perfect detail by these skilled players; even the track timings are a precise match, down to the last second. A particularly poignant touch is the throat singing of Samin Son, and the voice of Ute Wasserman, who are both called on to utter all manner of grotesquerie. Like all the musicians here, they do it flawlessly and with a straight face. The only “missing” component is the sound of the vinyl skipping and scratching, a noise effect where the decision was made to simply replace it with silence. The process presented on both sides of this record is pretty fascinating – a form of reverse-engineering, an act explicitly intended to “repair and restore” the damage done through the turntable wreckage.

I sometimes have mixed feelings about these “re-scoring” projects, of which one notorious recent example would be the superhuman efforts of Zeitkratzer Ensemble to “play” the entirety of Metal Machine Music, as orchestrated by Reinhold Friedl. Less successful was a performance I once saw of Brian Eno’s Music For Airports, where the Bang On A Can All Stars missed the entire point of the piece – it was designed as a tape-composition miniature of remarkable economy and efficiency by Eno, and didn’t benefit one iota from being scaled up to orchestral dimensions. Those reservations don’t apply today, however, and I think Kentros has turned in a superb job. I just kept hoping for a bit more anarchy and craziness in the thing, especially on the first side; Greta Christensen and Camilla Sørensen are highly inventive, but not really irreverent enough for me, lacking the sarcasm and subversive humour of People Like Us. Nor do their juxtapositions manage to summon the fire and anarchic demons of Otomo Yoshihide.

Even so, this is worth investigating; the cover art, uncredited, plaits together strips of cut-up photographs to provide a visual analogue to the release. From 19th November 2020.