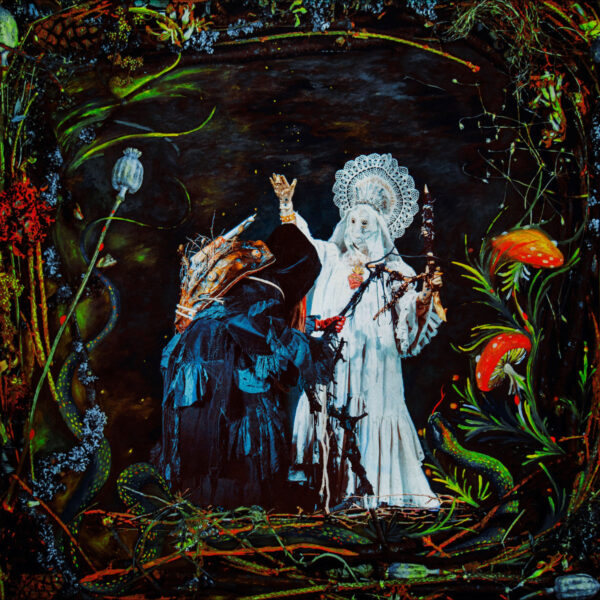 In Finnish, “lastenkerääjä,” means “child collector”, referring to a child’s mind in which the difference between what is real and what is imaginary can be arbitrary and whimsical: beliefs, unreliable memories, fears and perhaps even obsessions can be more real than what is immediately experienced by the senses, themselves not always dependable. What is in the mind and the emotions blend with experience, child’s play, stories, magic and ritual to create something unique, subjective, playful and particular to the moment. This then is the theme behind Helsinki-based duo Akkajee’s second album, coming about seven years after their self-titled debut, and true to its theme the album brings together Finnish folktales, folk and self-made instruments, and an experimental and open attitude to transform the raw material of the folk stories into songs of minimalist alt-mainstream folk that at times can be emotionally dark and raw. Akkajee are Meriheini Luoto on vocals and nyckelharpa (a traditional Swedish stringed instrument similar to a hurdy gurdy) and Iida Savolainen on vocals and viola.

Leading listeners down the rabbit hole into this wonder world is the title track based on a story about an old fellow who picks up misbehaving kiddies in a sack and dumps the lot of them into a lake to drown. How lovely! Fans of dark folk can see where this album will be going: whispered yet excitable vocals and a sparing though gradually growing use of stringed instruments create an intimacy that becomes shrill and hysterical. Sure enough the tone of the recording darkens with “Yönitkettäjä”, a song about evil spirits keeping babes awake at night: the song is an odd melange of acoustic string noise and melody improvisation, at times forlorn and melancholy, and later growing menacing with deranged viola fiddling, a ghostly choral chant and burpy toad croaks.

After the fairly restrained knees-up “Orpopojan valssi”, based on a story about an actual orphaned boy in Finland in the 1930s and his tale of woe, the album takes a crazed rollercoaster ride up hill and down dale in the mystical land of Hymylä, a journey that becomes increasingly shady and ambivalent, culminating in a lumbering dark-folk slacker canter, in “Hys hys hymylään”. Akkajee briefly return to some semblance of minimalism on “Aidin itku”, but this song rapidly becomes desperate in emotion and ambience. Closing track “Syntymä” mooches towards the sunset but quickly develops into a whirlwind of whispers, crooning sighs and overworked strings that teeter on the edge of a dark abyss.

All songs on this album turn out to have very strong and distinct identities despite their initial unadorned style based around two voices and two stringed instruments. For this reason perhaps they demand a lot of your attention and while the album is not all that long (roughly 40 – 41 minutes), you can end up feeling quite exhausted and emotionally drained from hearing it all the way through. From just two musicians relying mostly on their singing, two stringed folk instruments and what appears to be a small palette of effects and home-made instruments, and playing in a deceptively frugal and restrained style, comes this very quirky tour de force of dark experimental folk.