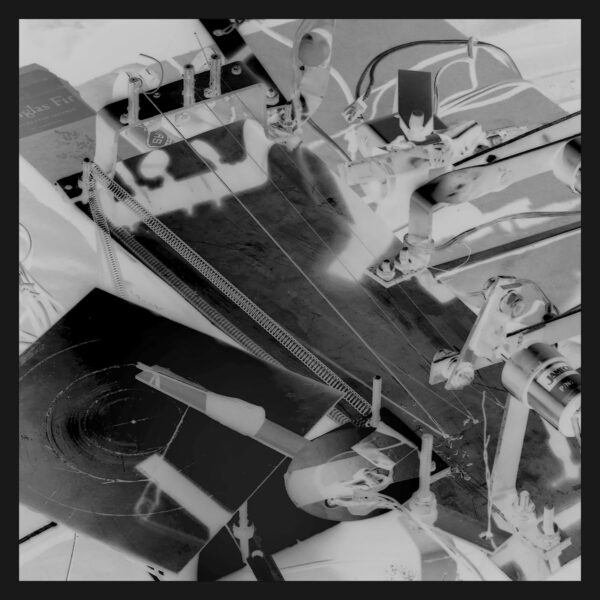 The second of two new cassettes from the Eh? Aural Repository of Bryan Day in San Francisco.

Kal Spelletich is an entirely new name to me, but this rugged American individualist has been on the margins of culture for many decades with his dangerous noise-making robot devices. Let’s state off the bat that it would be a mistake to characterise him as a musician of any sort, there is no discography to his name, and the sounds and the machines on today’s tape The Blessing of the ZHENGKE ZGA37RG (EH? AURAL REPOSITORY EH?115) are avowedly non-musical; Kal himself wishes to stress the complete lack of “store-bought instruments, samples, albums, [or] field recordings” involved in its production. The 12 tracks here were recorded in 2020, but it’s evident he’s been building his infernal engines for much longer than this.

His personal history begins around 1980 when he got involved in an aggressive form of street art / performance art in Iowa, that subsisted on the fringes of punk rock culture and may have left a few noses bloodied. He founded his Seemen organisation in 1987 to attract like-minded outlaws and disaffected souls wishing to inflict surprise and shock on society through hit-and-run-style tactics; it wasn’t long before he hooked up with Survival Research Laboratories, those crazed Californians led by Mark Pauline with their warlike mechanical devices that were built to slice, saw, burn and crush each other in the arena, thereby presenting a bleak nihilistic view of defeated humanity in a post-apocalyptic world. Spelletich worked with them through the early 1990s. It’s also no surprise to find him flourishing at Burning Man, that open-air festival that continues to be a popular refuge for assorted pagan misfits. His early manifestos find him spitting much bile and hate at the world, but Kal Spelletich may have mellowed a little since then, and one aspect of The Blessing is that it highlights the interactive nature of his robots, which is a fundamental part of the work; the audience must engage with the machine, even if it appears unsafe or the results might be unexpected, in order to generate some sort of performative response. To use his own expression, “vacuuming the floor or grinding coffee allows you to perform and collaborate with me!”

I mention this as there’s very little about Survival Research Laboratories that is “interactive”; rather the expectation is that audiences are invited (some might say forced) to witness a horrifying bloodbath of cogs and gears and flames, then go home with their heads in their hands. Oddly enough this once-radical form of expression is now, of course, much more commonplace – there’s the BBC TV show Robot Wars, and that episode of The Big Bang Theory where our heroes take on Kripke and lose. So maybe that’s an indicator of a successful cultural invasion, and even a form of participation if you will. The other thing to note is that the sounds on The Blessing are not quite as threatening or dangerous as some of the above spiel might suggest – in fact for the most part it’s very engaging, and the machines sound positively happy to be alive and performing their mechanical tasks. There may be a particular trope in 20th-century art which shows factory machines coming to life and developing human features – the most poignant and effective instance would, for me, be the illustrations of Boris Artyzbasheff. This might be what the artist means when he claims “I often felt like I was coaxing my motorcycle to talk”. More photographs would have helped one appreciate this release more deeply, but for those readers who are intrigued may I direct you to the artist’s own website.

It remains to mention the imaginative titles here, which are a combination of things – descriptions of the robot machines, elaborate mathematical formulae, or phrases which amount to a philosophical observation about the state of society. All of these titles indicate a powerful mind at work, an artist with high ambitions who dreams about changing the world with his machines. He’s done it. From 20th January 2021.