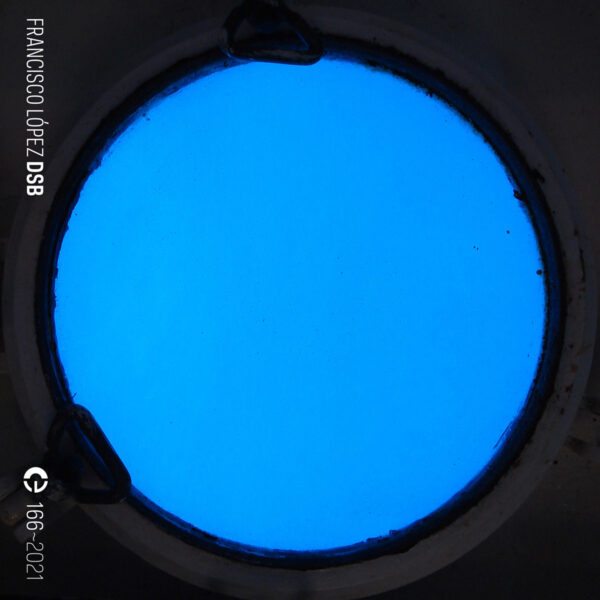 Another strong release from Francisco López, the very prolific sound artist whose passion and headstrong ways often lead him to make grand gestures and pronouncements, along with the music. Today on DSB (CRONICA 166-2021) he is reiterating – absolutely verbatim – the claims made for a 2018 release untitled#360 for the Emitter Micro label in Berlin, and noted here. The relevant passage is “an astonishing reversal of the traditional widespread subservience of sound to story-telling” and “the open shell of an apparent narrative becoming sound work”.

These phrases, and the artistic intention, continue to apply to today’s release, the cassette DSB. As with the 2018 record, my take is that he’s pretty much producing a very artistic sound-effects record, but at the same time López wishes quite strongly that we don’t hear it as a story or narrative, and just concentrate on the “new form of weird experimental music” that he offers. This is extremely difficult given the generous amount of the content on the tape, and the fact that it’s very redolent of a radiophonic play; one can’t help but hear it as the story of a submarine, possibly during wartime, with a brief strafe of gunfire and bomb explosions from an air attack, followed by lots of sub-aquatic adventures and some flurries of wind and rain when the sub surfaces now and again. For the “interior” scenes, López has much fun with the submarine’s sonar pulses and humming boxes of electrical equipment, weaving it into the general fabric of DSB and supplying plenty drama.

I fully appreciate this is not the desired response, but on the other hand it’s good to hear this sometimes-austere Spanish fellow injecting a lot more maximalism into his work. Known for years as a master of silence and inaudible records, he currently seems to be enjoying a purple patch where the joys of noise and incident can be savoured. I’m all for it…we dive at dawn! (27/01/2021)