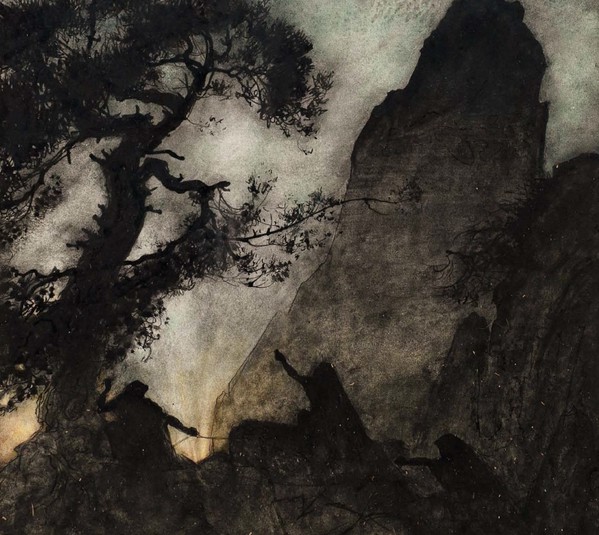 I’d hoped that the title of this album, the third from French BM project Caverne (originally based in Rouen in Normandy and later moving to Arriège in southwest France near Andorra), wasn’t going to be literal – but it is, as the project has now split and vocalist / multi-instrumentalist Amertume is continuing with other music projects. Based around themes of spirituality, folk or cultural traditions (that are disappearing in France under the pressure of modern life) and journeys, Caverne perhaps was always going to be one stage in Amertume’s musical and personal evolution. The third and final album turns out to be a very emotional and poignant release of moody and sorrowful atmospheric BM with rousing riffs and melodies and an attitude of defiance and resistance against the destructive forces behind national governments and global corporations that would wipe out local communities and their cultures, histories and knowledge.

Caverne’s style is very steely and gritty in texture yet streamlined (even graceful) in a way that highlights the riffs and the mix of emotions, ranging from utter despair and hopelessness to sadness or anger, across all five songs. With the album boasting a clean production, most instruments, even bass, can be heard clearly and on most songs a layer of sparkling, even jangly clean-toned guitar is prominent in the otherwise six-string grind. The usually slow to medium-paced music comes across as dark and introspective with plenty of black space within and behind the bluesy sounds and Amertume’s ragged wailing. The songs can be long – the shortest is almost seven minutes – and their structures can change throughout with new melodies, new moods and emotions coming almost right up to the end, yet they never lose energy and focus, and they are sturdy and compact.

You’re taken on an often harrowing and exhausting journey where it seems hope and light have been extinguished but the emotion never sounds forced or artificial though at times perhaps it can be overwrought. At first I thought Amertume’s vocals were too far back in the mix on the first couple of tracks; once in the middle of the album, I start to think that maybe keeping them distant in the music isn’t such a bad idea as the wailing and howling, and the sheer deranged quality of the voice, can be strident. That was really the only niggle I had with this work, otherwise the music is consistently good with flowing melody, sometimes rugged riffs and smooth changes in mood and emotion throughout songs.

The album’s best moment comes with the final track which is a three-part epic ranging across memory and nostalgia, moments of awe and wonder, despair at present times, meditation in darkness and the gradual inner strength that can emerge from the lowest depths of one’s being. There is not necessarily any promise of victory over darkness and the struggle may be never-ending, but at least if you have to go down, you can choose to go down fighting … and take your enemy with you. What a way for an album and a project to end … with inner light and steel.