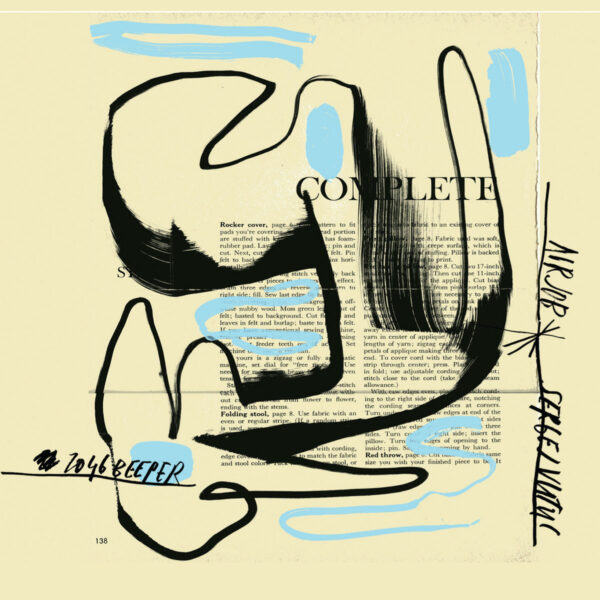 Unusual item is 2046 Beeper (NO LABEL), credited to Airjob and Sergej Vutuc, and a perplexing mix of indeterminate sounds it be…Sergej Vutuc is a visual artist and performance artist, born in Zagreb and currently flitting between HQs in Croatia and Berlin, although today’s item was sent to us from a Paris address. He might not be exclusively a musician or sound artist and from his website he seems to specialise in the production of artist’s books, risoprints, photographs, and other multiples which can be purchased at affordable prices from his site; plus he does performance art and exhibitions, all in pursuit of his artistic goals.

He’s troubled by the changing urban landscape: “Since the mid 1980s [his] work has been about observing the (over)development of modern society and the privatization of public space; nature being conquered by concrete, concrete being conquered by the subversive act of skating.” That last part refers to his abiding interest in skateboarding, which he evidently regards as a means of taking back control via some form of street-art expression. In case you were wondering, he probably likes graffiti too; if he’s invited to an exhibition space, one of the things he will do is draw on the walls, which along with his books, zines and photos he regards as a means of both documenting the ever-shifting landscape, and reframing it in some way. “Generally non-stop action and movement; fragmenting, altering, rearranging reality over and over, as necessary,” is how he describes his restless task. Our man loves a good collaboration too, and today’s release is the direct result of a long-standing friendship with Airjob, an experimental hip-hop guy from Detroit. As far as I can make out, they share the skateboarding interest as well as self-published zines and “sound-related artwork”.

This particular item – limited to 250 copies, each CD arriving with a separate piece of unique artwork – seems to have come out of live recordings made in 2018, at one of Sergej’s many skate-and-art festivals, which he calls the Roundabout series. There’s also some poignant observations about the smartphone, a device which may even play a part in the sound work that was created; Vutuc muses on “representation of information transformation with the constant addition of new layers”, which is quite an artistic way of describing the progress of, for instance, a selfie as it makes its way through the churn of social media, picking up comments and tags along the way. Beyond this, I’m lost; it might be that 2046 Beeper is a document of two guys playing in a room with a sampler and other table-top devices, and it’s not always easy to connect it to the whirlwind of street-wise actions implied in Sergej Vutuc’s spiel. However, it’s a fascinating listen of grumbly, disconnected noises and semi-recognisable forms, remorselessly city-focussed in its sweep, despite the allusions to birdsong in the text. Airjob may be supplying beats, loops and textures, but this isn’t recognisable as hip-hop by any stretch of the sinews, and the whole thing emerges as very abrasive art-noise, creating a disorienting and confounding effect.

Where some field recordists might strive to represent something of the truth of the city where they take their phonographic recordings, Airjob and Sergej Vutuc seem to aiming at some kind of extreme distortion, through constantly-morphing snapshots, and their vision of the city amounts to something very opaque, twisted, and strange. The plan is advanced by hints and clues in track titles, such as ‘Future Camera’, ‘Dream Stories’, ‘Manuel Boot Up’ and such. Unique and compelling. Arrived 7th January 2021.