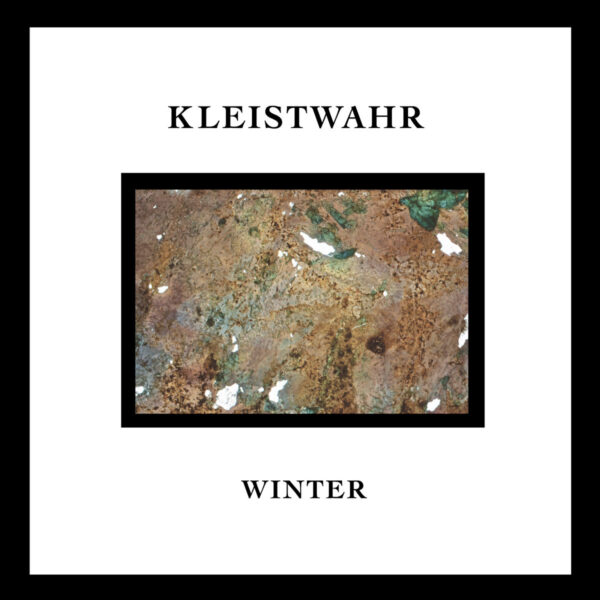 In my little corner of the world, winter is the only season: I’ve already reviewed one album called “Winter” in Japanese, though the band (Low Flying Hawks) that recorded it is based in Texas. Now here comes another album called “Winter”, this one from Kleistwahr the solo project of noise / power electronics musician Gary Mundy (of Skullflower fame) who runs the Broken Flag label. Originally “Winter” was part of a 10-cassette Various Artists anthology “On Corrosion” issued by The Helen Scarsdale Agency back in 2019: the theme uniting this recording and the rest of the anthology, featuring contributions from other artists like Alice Kundalini’s She Spread Sorrow, Fossil Mining Project and Ester Kärkkäinen’s Himukalt among others, was decay / disintegration / entropy. Now a release in its own right, having been remastered by virtual music polymath James Plotkin, “Winter” perhaps can be interpreted as a work that not only embraces decay and collapse but can transcend the original premise for which it was made and become a warning of oncoming dystopia and bleakness.

The album divides into two long tracks of sombre drone, noise, found sound and atmosphere that develop steadily into rich kaleidoscopic soundscapes. “We sense it through the even snow / rust eats the future” has a dreamy, heavenly ambience with resonant chiming bell sounds along with a wavering background drone that brings a sense of longing or loss into the work. Shrill agonised noise scree starts to upset the track’s tranquillity and from then on until just over the halfway mark Mundy continues with two parallel sets of sound: one peaceful and stately in its own way, the other a cacophonous and intentionally disruptive roller-coaster of gritty noise drone. The track continues its evolution which is sometimes steady and sometimes abrupt, the mood growing darker and more deranged as it does so. Anguished ghost voices join quite late in this split-personality soundscape, turning what started as a serene dreamscape into a nightmare.

“The solstice will not save us / everything we loved is gone” is not as interesting though it is a slightly longer work: it starts as layers of shrill drone, noise and a choir of demented voices trapped in a hellish shadow dimension and stays that way more or less until about the eighth minute when it becomes a lonely organ drone. By then the track has sorted out the fools and the angels among us listeners. Those who persist beyond this point will find themselves adrift in dark space where bits of rhythm, quivering drone and various other effects pass by. A feeling of despair, forlornness and abandonment is hard to suppress.

It’s a richly immersive and absorbing recording though for me the first track just pips the second for its variety of sounds that range from gorgeous to coldly remote, alarming and insane in turns. “We sense it …” is a hard act to follow, the second track needing at least to match it in terms of the breadth and depth of the universe to be created yet at the same time wind down to nothingness within the parameters of the album’s theme. Even so, though there’s no hope of spring or summer, with the implications of the possibility of rebirth or a new cycle of life, the noise drone worlds of “Winter” can be compelling enough that you might wish for this particular season to persist for another month … and maybe another month also …