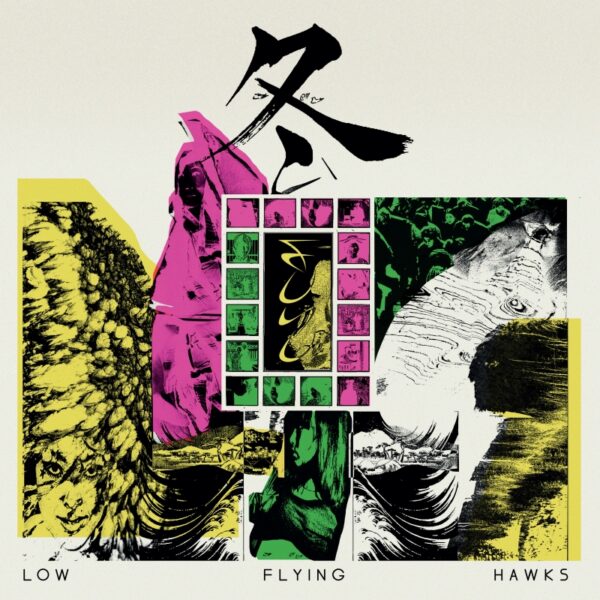 The third album from Mexican/US duo Low Flying Hawks, “Fuyu” – meaning “winter” in Japanese – completes a trilogy begun by LFH’s debut “Kofuku” and continuing with “Genkaku” based on the Ancient Greek myth of Sisyphus, condemned by the gods for trying to cheat death by being forced to roll a boulder up a hill to the top, only to see it roll back down, for eternity. The myth may serve as a metaphor for the despair of human existence and its apparent futility: we try and try so hard to reach a goal or fulfil a purpose only to see it either frustrated or to have to repeat it over and over, even if in another form, once it is achieved. Core LFH members AAL and EHA (they are known only by their aliases), both on guitars and vocals, are assisted once again on this work by Melvins drummer Dale Crober and Mr Bungle bassist Trevor Dunn, along with guest musicians Martha Domínguez Henkel and Luis Sergio Hernández on violin, Luz del Carmen Pastor and Valentín Mirkov on cello, and opera singer Martha Domínguez Henkel.

The album travels through a moody and sometimes dark and depressive mix of doom, drone, shoegaze, sludge metal and stoner rock, adding a four-piece chamber music group in later tracks and creating along the way a sumptuous soundtrack opus of heart-rending emotion and anguish, varied atmospheres and often mega-large contrasts in music that encompass the highs and lows of lifelong struggle. A blast of noisy drone scree that then dives straight into a stoner doom showgaze melange driven by heavy rugged guitar riffs and percussion, topped by EHA and AAL’s mournful vocals, coated with cold echo that makes them ghostly, sets listeners off on the journey that will go up hills and down valleys of longing, hope, despair and anguish. Use of echo creates and sustains a dream-like soundscape world in which these emotions clash as expressed in the music and its textures, in the anguished singing and in the ambience that changes from one song to the next.

At times it seems LFH dwell longer in each part of the “Fuyu” sound universe than is really needed, with the result that the musicians appear bogged down on some songs. Early track “Midnight” is a beautiful soulful piece though it becomes laboured the longer it continues. The further into the album we go, the more shoegazey mournful the music becomes and the earlier stoner doom rugged crustiness almost disappears. With closing track “Nightrider”, the longest track at over 13 minutes, the hard-edged sludge metal returns and the otherworldly dream quality and musical complexity of early tracks make a welcome return. Even then, much of the track meanders without much direction though perhaps this, like other moments on the album where the music seems stuck, may be justified by the album’s concerns about human existence and purpose.

The message that comes out of this album is that meaning and purpose are best found in the actual process or the rituals involved in that process in pushing the boulder up the hill, knowing that at the end, the process will begin again – but we can make of that new iteration a new adventure, a new journey on which to learn and understand something else. So LFH hope also with “Fuyu” – each time it’s played, something new might be found in it that resonates with listeners on their own journeys in life. While there is some very good, even great music here, and individual songs have moments of beauty and intense emotion, much of the album also has long passages where there seems to be lack of focus and listener boredom can set in. Take care, LFH fans: the early part of the journey is good but as you progress, it becomes more … Sisyphean.