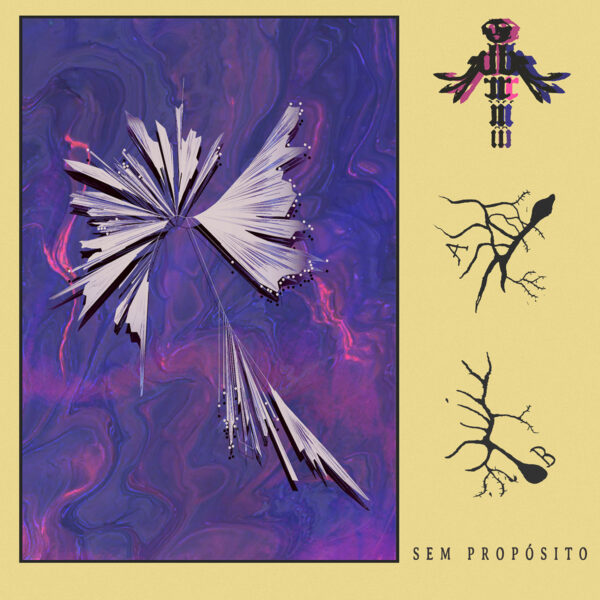 Over the past twelve months I have come across some amazing experimental ambient / black metal / electronic / trance albums by the Brazilian acts Bríi and Kaatayra, both helmed by guitarist Caio Lemos aka Serafim. He does it again with this early 2021 release “Sem Proposito” (“Without Purpose”) under the Bríi project name: this successor to debut album “Entre Tudo Que É Visto E Oculto” is a more streamlined, even minimalist work consisting of two largely instrumental tracks modestly titled “A” and “B”, each 28 minutes in length. A more intoxicating and heady fusion encompassing and mixing elements of dark ambient, atmospheric black metal, techno, trance and space psychedelia would be difficult to find even, I suspect, in Lemos’ own home city of Brasilia.

Starting with a hypnotic minimalist techno rhythm, “A” erupts into fiery scrabbly tremolo BM guitar, throbbing blast-beat percussion and harsh throaty roaring vocals. The track goes through a prog-rock phase with clean-toned lead guitar soloing before moving back into more frenzied BM interspersed with moments of trancey cosmic space ambient and psychedelic rock before fading into soft wintry-breeze ambient droning and a techno beat. The transitions from one style of music to the next are not smooth and the whole track ends up as a series of cut-outs of different genres with no obvious over-arching musical motif or theme that would unite the lot. Like “A”, “B” begins with a techno rhythm and beat – the same one “A” ends with, in fact – that becomes a more lush piece of electronic tropical techno-disco. Morphing into spacey prog-rock / electro-ambient, “B” eases into and through its transitions more easily and its transformation into bleakly harsh atmospheric BM savagery retains melodic elements of pure-toned space electronica. The music is noisy and cacophonous in its details as it races through its middle section before suddenly (though smoothly) slowing down and becoming a heady swirling dronescape of pulsing electronica, silvery glitter and a choppy rhythm texture.

While “A” is a bit more disjointed than “B” and the recording as a result isn’t as consistent as it could be, the sonic universe within is a truly astounding and mesmeric structure in which you wish you could be lost forever, even with all its darkness and epic scale in which details at the microscopic level occur and co-exist, even if briefly, with the vast yawning black space behind the music. The harsh black metal contrasts with and complements the trance-like ambient / cosmic space electronica. The album’s theme of an indifferent universe where life appears and evolves without apparent purpose or reason may be bleak and despairing yet the music in parts appears possessed of an attitude of defiance and determination against such a cold and remote impassivity on the part of the cosmic creator/s.