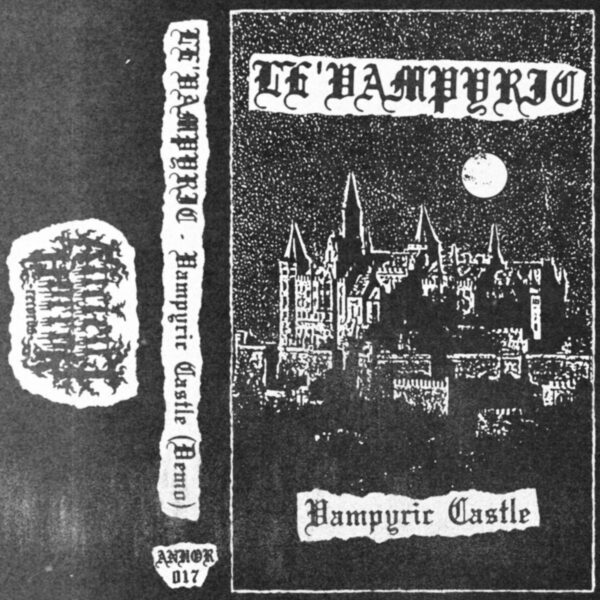 In case the album and song titles are not too clear, the theme of this raw noisy recording by Indonesian-based raw BM act Le’Vampyric is the family of Vlad III Dracul, the 15th-century ruler of Wallachia (southern Romania) more usually known as Vlad the Impaler for his psychopathy and use of brutal and sadistic violence during his reign. (Local Indonesian / Malay legends about vampiric witches called pananggal who prey on pregnant women and small children by night must have been considered too tame as sources of bloodthirsty BM inspiration.) “Vampyric Castle” is the debut work for Le’Vampyric and came out in April this year originally as a digital release on Bandcamp, later being picked up for release on cassette by Singapore label Ancient Horror Records.

After a cheesy, sometimes out-of-tune organ melody introduction (“The Castle”), we’re straight into the business end of Le’Vampyric’s trashy lo-fi BM aesthetic with “Mircea I”, named after an ancestor of the aforementioned Vlad and a relentless and repetitive neo-primitive roar of scrabbly tremolo guitar, tinny percussion and what seems like a tape loop of echoes of some swamp monster stuck and struggling in an underwater metal pipe. Vocals can hardly be distinguished from the noisy reverberating background ambience but at least the speeding grind guitars and percussion stand out for their energy and fury. Shrill dungeon synth horror introduces “Vlad II Dracul” which starts out as a reiteration of “Mircea I” in a different key but later brings in new riffs. The vocals are much clearer on this track at least.

The last couple of tracks lift the demo’s game beyond decrepit lo-fi BM: track 4 is a short sickly shopping-arcade muzak piece with a growling rocks-in-the-throat vocal; and the pièce de résistance “Vlad III Dracula”, more recognisably song-like with definite riffs (if still not greatly different from what went before), finishes off the cassette with determined demented aggression and a very doomy melancholy lead guitar solo.

Enthusiasm, vision and good humour far exceed what Le’Vampyric was able to afford in the way of quality instruments and recording / production facilities, and the result is a little mini-album that’s fun to hear and which doesn’t take itself too seriously. It would be interesting to hear a full-length album from this act to find out what it’s really capable of in song-writing and musicianship beyond songs of repeating riff loops.

TSP followers may be keen to know that Le’Vampyric already has a second mini-album out, currently a digital work “Radu III le Beau ou l”Élégant”, dedicated to the younger brother of Vlad the Impaler who reigned as Prince of Wallachia for four short periods between 1462 and 1475 (the probable year of his death at age 37 years) and who was famous mainly for his good looks and mild-mannered personality as indicated by the album’s title. Due for release on cassette by Ancient Horror Records later in 2021, this follow-up work is musically different from its predecessor in being dominated by smooth dungeon-synth melodies and deep, soporific raspy vocals.