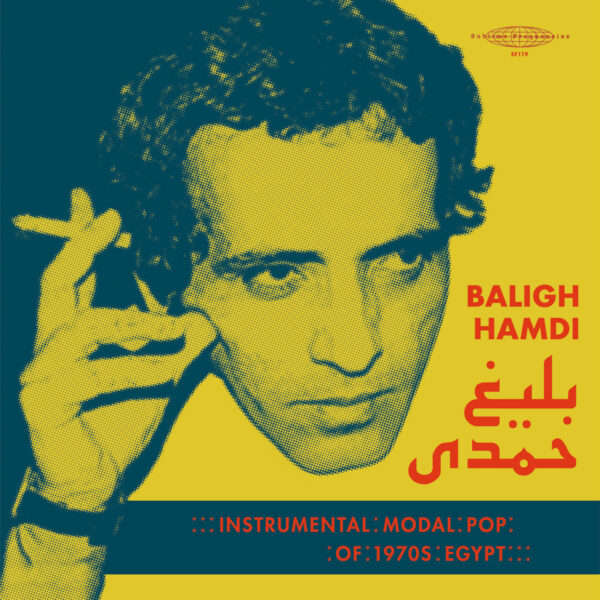 A major figure in 20th-century Arabic-language popular music as a singer, musician, band leader and composer, Baligh Hamdi’s career spanned a long period from the late 1950s to 1980, reaching his peak as a writer of hit songs for popular singers in his native Egypt, including the famous singer Oum Khalthum (Umm Kulthum) and creating a hybrid style of modern Arab music based on elements and influences drawn from Egyptian and other Arab contemporary and folk musics, and from other cultures outside the Arab world. In the 1970s Hamdi wrote works for the Diamond Orchestra, led by conductor Ahmed Fouad Hassan and featuring Omar Khorshid (guitar), Maged al-Husseini (organ, Moog synthesiser), Samir Sourour (saxophone), and Faruq Salama (accordion), to interpret and manifest his vision of this hybrid style that among other things introduced electronic instrumentation into the traditional Arab orchestra and required the musicians to read and interpret sheet music rather than memorise compositions and routines. The ability to read sheet music allowed the Diamond Orchestra to accompany several vocalists including Syrian-born artist Farid al Atrash with very different styles and repertoires. In the 1980s, Hamdi’s life and career became unsettled: he was accused of murder after Moroccan artist Samira Mlyn’s body was found at his house in mysterious circumstances in 1984 and he fled Egypt, only returning after clearing his name in 1989. Declining health prevented Hamdi from resuming his career and he passed away in France from liver cancer at the age of 62 years in 1993.

Now at long last those of us who missed out on hearing Hamdi’s compositions and the Diamond Orchestra’s performances of those songs can savour this compilation from Sublime Frequencies of instrumental songs the musicians recorded in the 1970s, when they were at the peak of their careers. The style of music featured on the compilation spans a range of genres and combinations of genres, and include Arab folk and the classic contemporary music that was popular in the Middle East from the 1920s onwards, along with jazz and psychedelic rock and pop coming from the West. All songs are instrumental and I imagine that lyrics might have been added at a later time after the original recordings, depending on which singer was to perform the song and the purpose of that performance. The music is very clean and clear but it does sound very busy and lush, and a tad decadent. Songs aren’t all that long – quite a few don’t even last two minutes – but have a very epic, almost Hollywood-blockbuster feel and the languid atmosphere to match. Indeed, Hamdi also composed music for films and theatre dramas so perhaps it’s not surprising that most songs have quite distinct moods and ambiences.

It’s all very heady and hypnotic music to savour for well over an hour and I confess to finding a kitschy, even cheesy quality in a lot of the tunes and their treatment, especially when al-Husseini hits the organ with its near-sickly rich tones and the melodies start swirling through the air leaving impressions of heavily pungent perfumes. If you’re falling into the same trap as I am, you’re best off hearing the whole compilation first to find the music that most appeals to you and stick to those whenever you want to hear the album.

For me, the strangest and most beguiling of the lot is “Chaka Chico”, in style and mood almost a tiny desert Western soundtrack with a very shrill whistle melody and an archly acid accompaniment on oud, saxophone, theremin, possibly zorna (an oboe-like woodwind) and other instruments taking their turns. With 19 instrumental songs on offer, the album readily lends itself as a source of library music for DJs to sample; no doubt in the not-so distant future, someone will produce a set of remixes of songs from the album, which would benefit the shorter original tracks and reveal their full immersive potential.

Rounding off the compilation is Hamdi’s particular version of “(Where do I Begin?) Love Story” which in spite of the familiar melodies is full of mystery and intrigue – as is most of the compilation itself. Just listening to Hamdi and the Diamond Orchestra’s rendition of this song, after all the countless cover versions it has attracted over the years to the extent that it has become quite banal, you realise it still has something unusual and unique to offer. That surely bespeaks genius on Hamdi’s part as an arranger and on the musicians’ part in interpreting his arrangements.