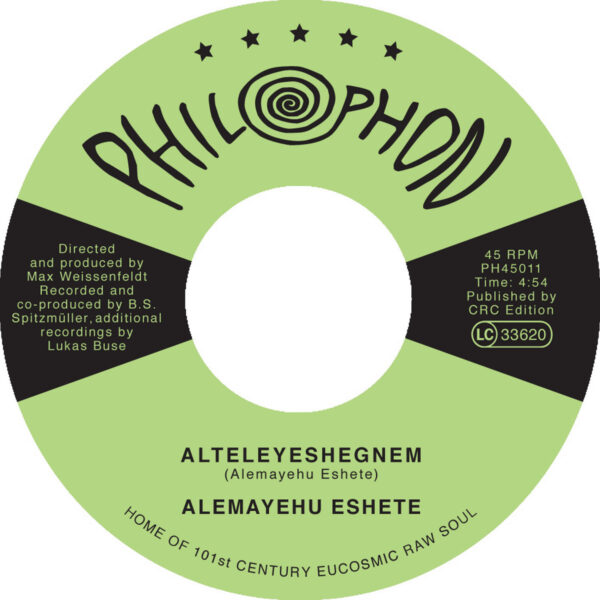 As my way of farewelling Alèmayèhu Eshèté, the great Ethiopian singer of the 1960s / 70s variously nicknamed the Elvis Presley or the James Brown of Ethiopia and who died earlier this month (September 2021), I dug up this release by Philophon which reinterprets a couple of old Ethiopian jazz songs that Eshèté made famous with his soulful singing style. Side-A song “Alteleyeshegnem” gets a slinky funky hip-hop makeover from Philophon’s house band with a harsh, almost slamming beat while sinister-sounding saxophones either blare away or snake around the percussion. Eshèté’s own singing alternates from controlled crooning to soaring emotive wail and back, all in the space of just over two minutes after a long instrumental introduction. With strange mystical ambient effects in the background, the entire song has a very noirish feel. Side-B track “Temar Ledje” showcases a sweeter side to Eshèté’s singing and is altogether a more soothing and reassuring song, without skimping on the vocal gymnastics he was capable of. Conversational patter, urgent declamation, soaring ululating melismatic singing: Eshèté has it all on this song. The vibraphone instrumental solo is a beautiful little head-spinning trance addition to the sax-dominated orchestral backing.

This updating of a small part of Eshèté’s repertoire is a lovely little entrée into the work of a major Ethiopian artist, one of many who were active in Ethiopia’s jazz music scene from the 1950s onwards until 1974 – the early 1970s are regarded by many people as the Golden Age of Ethiopian jazz – when military rule began in Ethiopia and forced these musicians, seen as associated with the previous government under Emperor Haile Selassie, to either go into exile or lie low. Much of Eshèté’s work has already been collected by the Buda Musique label as part of its Ethiopiques series (volumes 9 and 22 feature his work exclusively) for those keen on hearing more of his angelic voice and adept style.