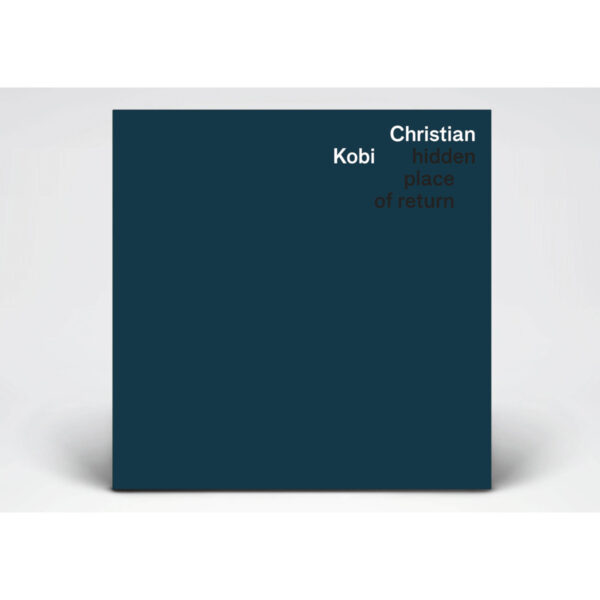 Subdued, minimal, long-form saxophone improvisations from Christian Kobi on Hidden Place Of Return (CUBUS RECORDS CR 375). He serves up six lengthy performances across two CDs, each time forming an ad-hoc duet with a different collaborator, on a different instrument – Jacques Demierre, Camille Emaille, Christian Müller, Mars Unternahrer, Antoine Chessex and Julian Sartorius. For added poignancy, he did it outdoors in the Gurten quarry, a place not far from Bern which supplied the blue sandstone for Bern Cathedral. It’s another lockdown album, which probably accounts for why they went outdoors in June 2020.

Besides being quiet and minimal, the main characteristic I’m feeling on today’s spin is one of hesitancy and doubt – as if each musician feared to make a definite statement, and instead opted for something sketchy, provisional, full of pauses. Given how we all felt across the world at that time, such a mindset is completely understandable. Demierre’s spinet, acting like the typewriter to Kobi’s disillusioned dictaphone, adds acoustic punctuation that has an air of finality, a door closing. Even when the music becomes slightly agitated, as it does with Emaille’s percussion kit accompanying Kobi’s sad drawn-out moans, the energy level is used up very quickly and the joggers run out of breath, returning to their rather despondent contemplation of mortality. I liked the meditational one which ends CD 2 with Müller’s electronic additions (heaven knows where he plugged in his boxes at the quarry), an 18:00 set of drones that sound both replete with content yet also emptied-out of emotion, both players striving to feel anything touching against their numb frames. The birdsong in the quarry – audible throughout the whole album – is especially touching, adding a faint trace of optimism in among the existentialist anxiety. (For more by this duo, be sure to find a copy of A Second Day on Herbal International).

On CD 2, one highlight is the humming-together murmurs of two saxophones as Chessex joins the conference, and occasional high-register trills allow a little sunlight into the foggy shroud. For sheer tension and neurosis however, it’s hard to beat the final track where Julian Sartorius brings his percussion kit to the fray, along with a “saw blade”. Somehow the presence of that deadly tool alone brings an air of implied violence to the session, and Kobi is on the verge of howling in agony as he writhes under that blade. In contrast to the still serenity of the Müller piece, this Sartorius is restless, jumpy, and irritable. It remains to mention the title of this set, which I (in my despairing moments) initially read as Hidden Place Of NO Return, as if the musicians had been led by COVID-19 to a horrific nether region of no escape. Instead, I think Kobi and his colleagues are aiming to build a “safe place”, a haven of seclusion, with their music, a zone of solace and contemplation, and a private ward to commence some sort of personal healing process. From 16th February 2021.