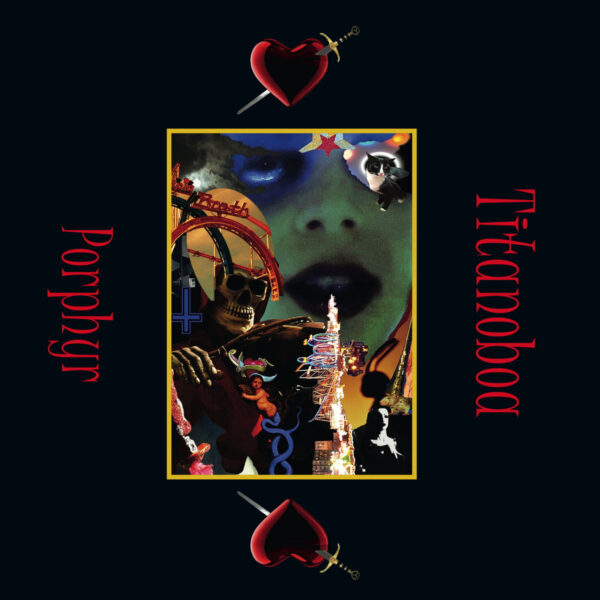 Titanoboa is Melani Wratil. She has made her debut solo record for A-Musik called Porphyr (A-MUSIK A44V), described here as “electroacoustic noire” and decked out with cover collage artwork packed with vaguely unsettling symbols and signs. She does indeed seem to be aiming at a saturnine and somewhat troubling mood on these instrumental tracks, and sometimes arrives at a form of modernistic horror-movie music, or a generally creepy and sinister atmosphere, not unlike the macabre Swiss studio act Sum Of R, led by Reto Mader. She achieves this through lots of layering and studio technique, using keyboards, turntables, her own voice, noise, and a fair bit of reverb and phasing; at times, the accumulated sound is just a shade too overloaded, resulting in a rather sluggish feeling. Clearly Wratil is no minimalist. I liked the pile-up of multiple chaotic elements on ‘Disasta Komiti’, the track which closes side A, whose high-speed whirrs and alien sounds invoke a good sense of panic and paranoia. Overall some nice moments on Porphyr, and plenty of rich crumbly textures to savour, but compositionally a bit under-nourished; her main technique is to marry up a pulsating rhythmical thump with a drawn-out darkened drone, then beef up everything with a lot of juicy effects, producing what could be mistaken as out-takes from The Mark Of The Mole. She doesn’t quite have the emotional depth of truly harrowing acts like She Spread Sorrow or Pharmakon (the press notes invite comparison with the latter), and the album leaves us feeling vaguely troubled rather than trembling uncontrollably, in fear of our lives. She takes her name from a now-extinct giant snake, that may have existed in prehistoric times. (12/02/2021)

Exquisite computer-derived vocal gibberish from Irish audio-visual artist Barbara Ellison on her Cybersongs (UNSOUNDS 67U) album. She did it through the use of text-to-speech apps, software that’s able to translate machine-readable text in a document into something resembling spoken word; I think “voice avatars” may also have come into play, which is a new thing on me, but apparently they’re used by people in social media who want a talking / animated avatar to help present their online content. Most of Cybersongs relies on endless repetition and loops to achieve its effect, and at times we seem to be experiencing a hyper-real version of the vocal parts of Einstein on the Beach, or perhaps a voiceified version of an early Steve Reich composition. Ellison, who composed an entire CyberOpera in 2019 (subtitled A Trans-Human Opera in Three Acts), is able to do this with unearthly precision, letting the computer software do the heavy lifting and achieving results that would be impossible working with just magnetic tape in a studio. There’s nary any intended meaning to these words; rather, the artist mostly deals in fragments and micro-fragments, vowels and phonemes, and hoping to generate new forms of meaning thereby. By forcing the TTS to do things it shouldn’t, she’s also generating artefacts and glitches, which she welcomes, and lets them become part of the work. Some musical “backdrops” emerge on certain tracks, generated by means I know not but they follow the same pattern of looping and repetition, thus creating uncanny and rather wayward efforts in song form, as if a damaged computer were trying to emulate human creativity and coming up with these half-familiar warped forms. Could be read as a rather chilling view of the future; the idealised human portraits on the cover, also generated by computer, do nothing to dispel the whiff of the Ex Machina movie (2014). (16/02/2021)

Guitarist Aidan Baker continues his collaborative projects alongside his Nadja enterprise and we last heard him doing it with Gareth Davis on Invisible Cities parts I & II. His latest group is called Whisper Room, whose new album is Lunokhod (MIDIRA RECORDS MD105), named after Russian moon-roving robots that were sent up to Luna in the late 1960s and 1970s as part of the Soviet space race. As it’s structured in seven parts, the Lunokhod may be suggesting a cosmic space-exploration story involving these Rusky androids, across its allotted span. Baker was obliged to create the album remotely in 2020 (due to “The Reason”), and sent files from Toronto to Berlin to his drummer Jakob Thiesen and bassist Neil Wiernik, with additional portage to their sound designer Scott Deathe, their go-to guy for creating exciting processes, treatments, and pedal effects. This self-isolation obstacle hasn’t prevented the creation of a subtle and well-produced set of tunes, and the understated, mesmerising music coagulates into pleasing amoeba-like shapes as surely as if the band were strumming and pattering together right there in the room. Thiesen is a necessary backbone; beats and rhythms abound through the set, starting out lively and skittery and growing more relaxed as the record continues its (planned) journey from avant-rock influences (shoegaze, krautrock) towards more balmy ambient tides. I tend to expect a heavy drone when Baker’s name hoves into view, but I’m way off the beam; in this instance it’s more like a detailed mosaic of small sounds, woven together to create large curtains of transparent, floating, noise. Pleasing. (16/02/2021)