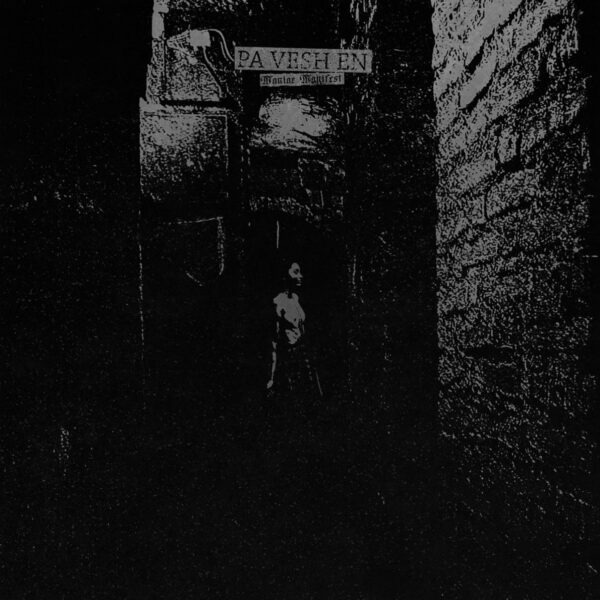 For an entity about whom very little is known, save that it is based in Belarus, the depressive ambient raw BM act Pa Vesh En has done very well in notching up a respectable discography with three albums in the last four years and a slew of shorter releases, all on the Iron Bonehead Productions label, since starting in 2017. Third album “Maniac Manifest” features PVE’s trademark bleak atmospheres with the shadowy murk and the hidden ghosts, the horror-stricken shrieks and the combination of near-industrial grinding guitars, clanking metal noises and machine-gun rhythms. What sets the album apart from previous work is the intimation of a malevolent spirit now powering the music; while past recordings dwelt on the bleakness, emptiness and hopelessness of life and living, and that context perhaps together with inner chaos leading to madness, now that madness is emerging into the open with fury and violence, and ranging – or should that be rampaging? – over new (to PVE, that is) musical territories.

After a bit of a slow start with a couple of tracks to put listeners at (un)ease, the shadows clear to reveal a startling sight: teeth bared and slavering, claws and knives unsheathed, the cage unlocked and open, “Chamber of the Rotten Flesh” charges out with fast banging percussion, cutting chainsaw guitar frenzy and a chorus of deranged demon voices in their wake. The energy carries over into “In the Wood of Hanged Men”, emerging halfway through the track and taking it over completely with hard-hitting, powerful ferocity. The song becomes a massive blackened doom monster in its last couple of minutes.

PVE dresses up a repeating synth melody loop in raw guitar noise, tortured roaring vocals and a dark haunted ambience in “Conquerentes de Iniqua Nece Confessionem” but this turns out to be a monotonous experiment in sustaining mood and atmosphere, and the momentum from the previous tracks is lost in the mess of roaring guitar grind and murk. “Spellbound by the Witchmoon” goes some way to reset the album on its path with a stomping rhythm and headbanging beat amidst the screaming, the cold synth and the clouds of churning noise: the demons within appear to be having a party, of all things! The experimentation with music elements continues on “The Black Coffin”, a funereal doom ambient track with epic synth orchestral tendencies.

While there is still plenty of wailing-wraith misery in PVE’s universe, whoever is behind PVE is now diving into 1990s-era second-wave black metal verging on headbanging heavy rock, funereal doom and epic symphonic metal, and finding much that makes him (maybe her) happy. The PVE guy is also not averse to experimenting with sound and song structure on tracks at the start, end and middle of the album. The result is that “Maniac Manifest” sounds more like an uneven collection of songs done in different styles of music, particularly in its second half, rather than a set of songs united by common musical and lyrical themes and a narrative. Even with the loss of focus and direction this implies – and at times the album does seem to get a bit bogged down with musical diversions – the upside is that “Maniac Manifest” never ceases to surprise with something new from PVE.

If the PVE guy continues his path into a more varied musical universe, while continuing to sharpen his song-writing and playing skills, his next album is likely to be his breakthrough and masterpiece work. There’s a lot on “Maniac Manifest” that is already very good technically if obscured by the production and murky ambience, and perhaps the next album might need a clearer sound for the music to emerge from its dark shadows. The challenge for PVE must be to continue expanding his musical range without losing too much of his sound or identity.