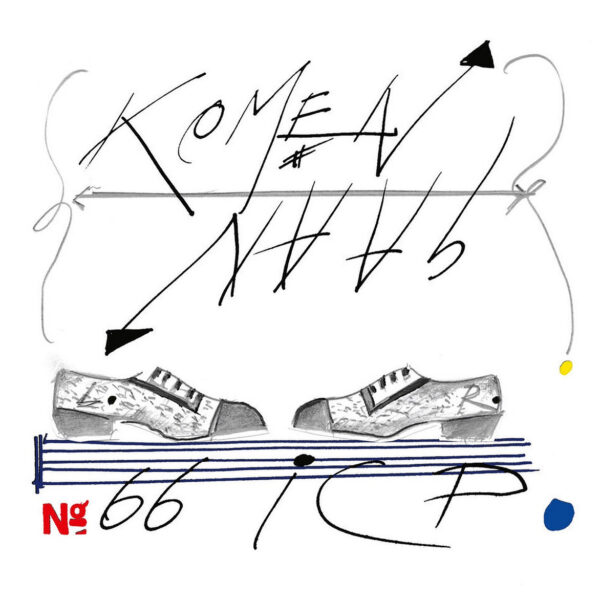 The Instant Composers Pool is an important part of free improvisation history. Han Bennink, Misha Mengelberg and Willem Breuker founded the ICP in 1967 as a focal point for free music and avant-garde experimentation in Holland at the time, and there was also of course the ICP record label that issued many documents of performances from 1967 onwards. The group intersected with other free players around Europe, notably Derek Bailey and the Incus label, and the recorded meetings of Bailey and Bennink in the early 1970s take some beating in anyone’s tome. There’s also some crossover with Peter Brötzmann and his Free Music Production label. It so happens I have at least one ICP vintl item in my so-called record collection, the 1969 Bailey and Bennink date catalogued as ICP 004, and a joyous slab of near-anarchic madness and noise it do be. While I’ve never seen Han Bennink play live, I gather he can be both an intimidating presence and an enabling one, depending perhaps on where you sit in the audience and your attitude to free music.

I am delighted to see the ICP label is still releasing records and we’re now up to 066 in the catalogue, with Komen & Gaan (ICP 066 CD), a CD credited to the ICP Septet joined by guest players Joris Roelofs and Terrie Ex, plus a pianola (about which more shortly). Together, this group play a mostly acoustic set on woodwinds, trombone, bass, piano, violin, and percussion, plus the acidic electric guitar of Terrie Ex. The fluidity, articulation and make-it-look-easy insouciance of these players is astonishing, with the clarinet playing (not sure which of many woodwind players to credit for it) reaching especially lubricious heights of melodic toot, though the spirited jangly-chord bashing of the pianos also brings home the lardons in this stew, likewise the light-touch violin/viola work of Mary Oliver. They did it in La Brocope, a venue situated in Oldeberkoop in North Holland, which also happens to be a cafe-restaurant. Inside the CD is a booklet of photos where the musicians look very much at home in a place they evidently inhabited in no uncertain terms, and appear happiest when bottles of wine and plates of food are nearby. We do often hear these days that musicians get quite attached to a venue, a studio, or the house where they made a record, and are moved to mention it in the sleeve notes or (very commonly) refer to the room or the place as a member of the group.

As to the music here, what we have is an entertaining and pleasingly-odd mix of all-out free playing combined with other more user-friendly musics – trad jazz, classical, Duke Ellington-inspired forays and such, so that at times the band have the air of a skewed cabaret band at a Sunday pub lunch. This jaunty atmosphere is sometimes fostered and advanced by the tunes from Mara’s pianola, which when wound up and set in motion churns out popular happy tunes, immediately accompanied by merry parps from the woodwind section of ICP Septet as they intuitively pick up the melody. As to the classical music side, it’s on ‘GuTer’ where the band rip their way into Bach’s Toccata and Fugue (played on the piano and joined by other instruments) with gusto and uproarious humour, creating a joyous pile-up of musical ideas at 100 mph. Some of this description may suggest a rather “zany” vibe, but it’s refreshing to hear improvisation done without the players taking themselves too seriously; the closest the UK may have come to this jeu d’esprit would be The Promenaders, featuring Lol Coxhill, Steve Beresford, David Toop, Max Eastley and other UK stalwarts who weren’t afraid to break away from the purist Company Week strictures and mimic a palm court dance orchestra (and it’s a shame they only made one glorious album).

Take a bow Ab Baars, Mary Oliver, Walter Wierbos, Michael Moore, Ernst Glerum, Guus Janssen and of course the founder and musical director Bennink (who still looks dangerous and anarchic even when photographed in respectable disguise of a blue shirt and necktie). The good-old-days theme is picked up by the wingtip shoes on the cover drawing (also by Han B.). A delight! From 16th February 2021.