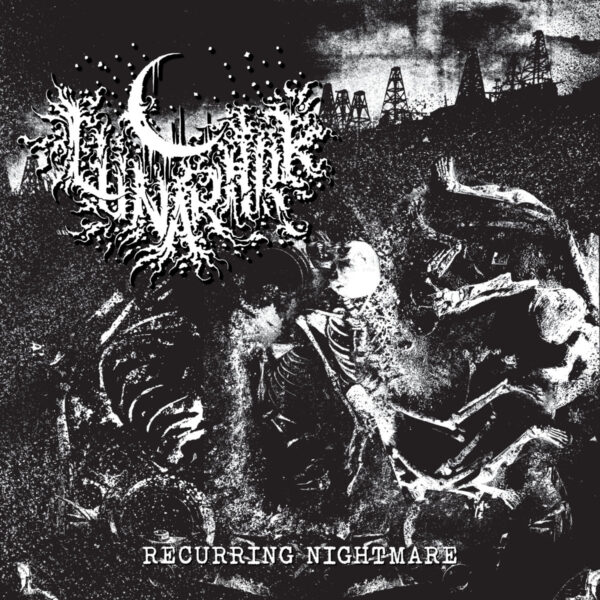 The artwork for this, the first album from Boston-based blackened sludge doomsters Lunar Ark, doesn’t look very inviting and might suggest the music within is a cheap and trashy punk-influenced tirade against capitalism and its oppression of us little people. But as the cliché goes, books – and albums as well – should never be judged by their covers and this particular tome turns out to be a very meaty and substantial work. Lunar Ark, one of whose members runs the Realm and Ritual label which specialises in US black metal and dungeon synth music releases, plies its trade in grim and oppressive blackened droning sludge doom metal with an abrasive paint-stripping sound, headache percussion and vicious vocals that deliver lyrics railing against neoliberal capitalism and class division, race bigotry and discrimination. While the album’s title “Recurring Nightmare” suggests that the topics of the band’s ire keep cropping up so much they are virtual fixtures of our corrupt Western societies, at the same time the music features passages of atmospheric music hinting at hopes that one day we can overcome longstanding divisions intended by our elites to keep us at loggerheads against one another and unite to recognise, confront and defeat our real enemies.

Featuring three long tracks, the album is intended as harsh and confrontational with heavy-hitting drumming, painfully scourging guitars and piercingly acidic distorted vocal shrieks. I wouldn’t like to know what the Lunar Ark singer’s favourite tipple might be: mamba snake venom must be the active ingredient in the recipe. Dreary in atmosphere, drudging in pace, with a few melodies repeating over and over, the songs can be hard to bear for their first few moments. Only much later in each track is there a glimmer of another world, that offers the possibility that we can change our circumstances to something better, before our reality intrudes and takes that possibility away.

Opener “Torch and Spear” introduces listeners to Lunar Ark’s modus operandi of hitting them hard with pounding sludge doom heaviness and those distorted corrosive vocals ranting against racial bigotry and discrimination, and the violence that results. Midway through the song, the music enters another realm, one that casts the song’s concerns in another light, and later lyrics appear to hint at possible reconciliation, that many we think of as racial bigots themselves have been victims of class oppression and have been silenced over generations, and that everyone needs to listen to and hear one another out, before we can set about changing ourselves and our societies. “Fever Freedom Dream”, a slightly clearer and more melodic track, starts with a spoken word sample of US writer Henry Miller’s unflattering opinion of New York City before trudging through pounding sludge doom and churning through lyrics about mechanised urban life and alienation from nature. As “Torch and Spear”, a possible turning point arrives with a clean-voiced atmospheric post-metal interlude – but the rest of the song that follows appears to mock this idealistic vision in roiling guitar lava swirl and industrial metal drone shimmer.

At nearly 20 minutes and taking up half the album’s running time is the monster “Guillotine”, aiming at The Powers That (Should Not) Be and their hangers-on, and promising vengeance on behalf of those they have trampled over and are still grinding into the dust. It’s a slow and tortuous beast, not greatly different from the previous punishing tracks save for a brief tear in its oppressive fabric where listeners glimpse possible enlightenment and a ray of hope. The track continues to grind on but in the background distant clean-voiced vocals, etched in reverb, bring that hope into the darkness to illuminate a path out of that dark world.

“Recurring Nightmare” does teeter on tedium due to the repetition within tracks and across them as well, with all tracks being similar in construction and the use of post-metal elements as metaphors for light, radiance and hope. It must be said though that the repetition, the monotony and other aspects of the album that don’t exactly make it an enjoyable experience are all in service to an outlook that is highly pessimistic yet which still clings to a hope that another, better reality is possible. Lunar Ark establishes a distinctive style of blackened doom early on and works it hard, bringing its vision of a dark, depressed world laid low and being ground by capitalism into stark being that can’t be ignored. After the music fades out, you realise this is the world we are living in … the nightmare really is a fixture of our societies.