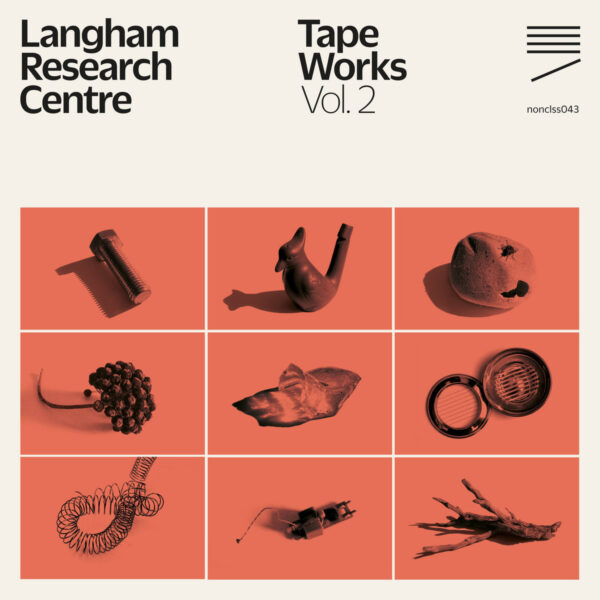 Another excellent release from Langham Research Centre, whose Tape Works Vol. 1 was released in 2018 by the UK Label and promoter Nonclassical. From same label, now comes Tape Works Vol. 2 (NONCLASSICAL NONCLSS043), another triumph of modern musique concrète from the team of Felix Carey, Iain Chambers, Philip Tagney and Robert Worby, who continue to apply their uniquely English approach and techniques to this genre of music, by which I mean they are concise, direct, and plain-spoken, creating music that is not given to extremes of volume, where meaning and content is paramount, and there is no need to disguise or bolster the sounds through excessive use of studio effects.

I’m interested to note that this time the foursome have seen fit to soft-pedal the Radiophonic Workshop nostalgia in favour of more direct homages to the Groupe de Recherches Musicales, the French post-war powerhouse of magnetic tape music cultivated by Pierre Schaeffer and Pierre Henry, and arguably one of the most important centres for this music in the world. More specifically, Luc Ferrari (another founding member of GRM) is the centre of attention here; in 2019, Langham Research Centre were invited by Cafe Oto to participate in the Stereo Spasms festival and do something for Ferrari’s 90th birthday. On the track ‘Dinotique’, we hear a piece directly influenced by Luc Ferrari’s ‘Les Anecdotiques’, a 2002 travelogue of sounds and spoken words. LRC created their own assemblage on similar lines, creating a rich jumble of fast-moving glimpses and snapshots interlaced with spoken word fragments; they even added samples from the original Ferrari work, in the hopes of conducting an audio dialogue of some sort.

The other main theme of the album is “brutalist architecture”. Evidently, our English friends have long had an interest in this side of culture which they regard as “an architectural manifestation of modernism”. This isn’t the place to rehearse the long-standing arguments against the social engineering of Le Corbusier and his followers, and instead we need to consider the views of those aesthetes who take delight in a rundown block of flats from the 1960s or a concrete bus shelter on the Orkneys, including everything from multi-storey car parks to underground bunkers along their pathway of contemplation. Accordingly, LRC have included location recordings drawn directly from very specific concrete monstrosities on this album, including the ramp at Tate Modern’s Turbine Hall, and the Barbican Centre. Outside of London, they also visited the shelters and pagodas at Orford Ness in Suffolk, used by the Atomic Weapons Research Establishment. One glimpse at a photo of these beasts induces instant despair; the inclusion of field recordings here on ‘Accarezzo’ invokes that desolate beauty in a vivid manner.

The whole album is excellent, but one standout for me is the closing piece ‘A Return To Spatial Futures’, weighing in at 11:03 mins and delineating a fascinating audio meditation on the promises of modernism, and what has become of civilisation’s hopes and dreams in the post-atomic age. This too uses voice segments, but with no intelligible speech, and the fragmented nature of their outbursts is somewhat alarming. There’s even music of a sort, if that’s how you wish to interpret the tapes of piano stabs and semi-melodic trills that occur at unexpected junctions. I suppose the key setting is Paris, as I think the work intends to focus on the buildings of Le Corbusier and two other Brutalists, and may even have used location recordings from these sites. I just like the episodic “radio play” vibe, something which fellow tape-manipulator Mark Vernon also does well, but his half-suggested narratives are much more benign than the sensations I’m getting from this rather nightmarish, darkened vision of Langham Research Centre. Even the title ‘A Return To Spatial Futures’ is poignant, as if revisiting the optimism of 50-60 years ago, suggesting that we must time-travel into the past to understand the future. From 16 February 2021.