Jantar are an American combo active since around 2015 here with new LP Sempronia (FEEDING TUBE RECORDS FTR544 ) and may include in their ranks the players Chad Laird, Kelly Rudman, Kirsten Nordine, and Tianna Kennedy, although Laird and Kennedy have played as a duo since 2005. Two of their previous releases, Suit Withers and Panisperna, are kitted out with picture-postcard covers of idyllic locales with blue skies, which may tie in to their plan to make “cinematic” music, or instrumental music that evokes film. Their first cassette was even called Taxi Driver and though I never heard it, there may be some explicit connection to the famed Scorcese movie. On Sempronia it’s a combination of short songs and longer instrumentals, and the band in a very approachable manner, rich with melody and easy-on-the-ear sounds; indeed we’re invited to perceive the results as “experimental easy-listening”, yet they manage to pull this off without dipping into the self-aware “retro” mode that blights such bands as Combustible Edison. Sempronia’s drummer is one strong point, capable of propelling the music into sunshine pop, rock, or light-jazz modes as needed; and at least one track ‘Immram’ indicates that the US underground still hasn’t completely shaken off the Krautrock bug, even if it’s filtered through more accessible musical layers (don’t expect anything like Can Soundtracks, to put it another way). The songs here are good instances of dreamy-ish pop, though stronger vocals and harmonies wouldn’t hurt; some may prefer the meandery instrumentals like ‘The Appian Way’, which aren’t too far away from a leaner and fitter Grateful Dead jam (although Coley claims to hear elements of Hatfield and The North and Gong). (21/01/2021) 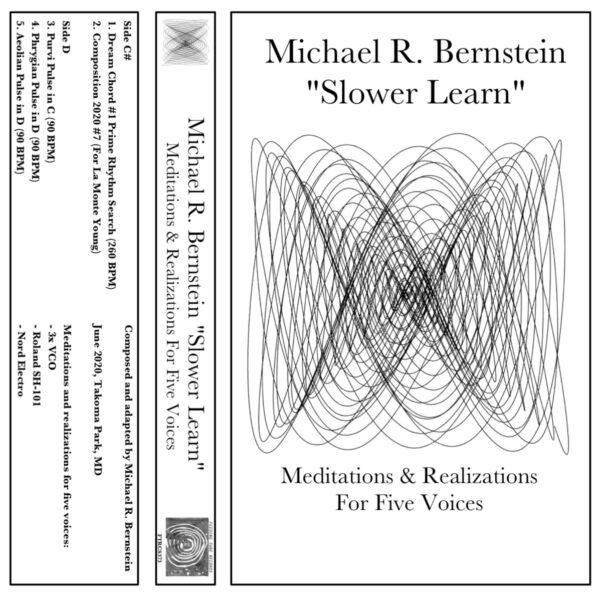 For something more in the way of experimental solo electronic composition, we have the cassette tape Slower Learn (FEEDING TUBE RECORDS FTRCS373) from Michael R. Bernstein. I haven’t heard a Double Leopards record since around 2005, but Bernstein was member of that sprawling noisy combo along with Marcia Bassett, Chris Gray, and others, and he also performed in White Rock and Religious Knives around the same time when American weird noise was much in vogue. Today’s record Slower Learn – subtitled Meditations & Realizations For Five Voices – couldn’t be further away from that genre of music, and instead is somewhat minimal, comprising precise electronic music delivered at a leisurely pace over five lengthy cuts, and perhaps making use of a sequencer to arrive at clean, clinical, perfectly-chiselled notes. In his titles, Bernstein makes allusions to the compositions of La Monte Young (and possibly to Terry Riley also), and aims to demonstrate his commitment to long-form duration. He also scores his work for specific musical modes, including Phrygian and Aeolian, in a way that might have had Tony Conrad nodding approvingly until his hornrims jiggled. At the same time, Bernstein evidently feels he owes a debt to experimental and minimal techno, and the music is indeed structured to provide very regular pulsations delivered with absolute accuracy – indeed four cuts even declare the BPM. I’m always interested to learn if the influences of Mego, glitch, and minimal electronica have spread outside of Cologne and Vienna in the last 20 years or so, but if he is influenced by these schools, there’s no denying Bernstein has a very American take all his own, much less severe, not so clinical. While he may take his time establishing a theme, once he settles into his building-block groove the results are very enjoyable. (21/01/2021)