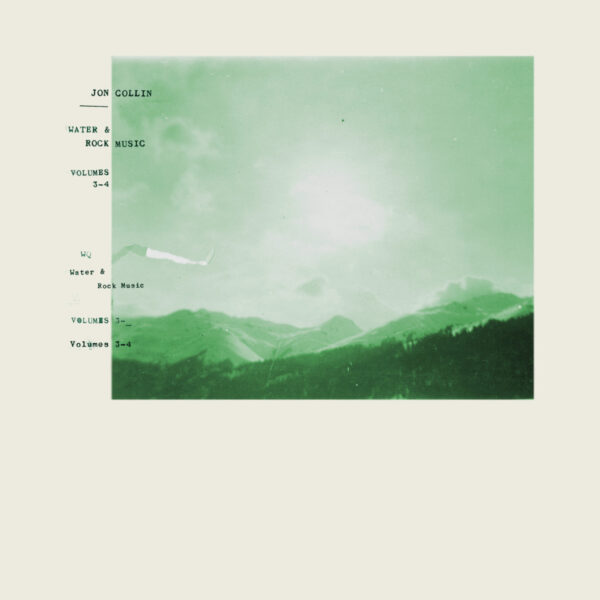 Jon Collin is a UK guitarist who might be based in Sweden just now. He has issued his own work on Winebox Press, a labour-of-love venture which involves packing cassette tapes in quite unusual wooden boxes made from salvaged wooden objects, often using twine and screws to hold everything together. There’s also the Early Music label, most likely another Collin enterprise, which releases limited CDRs of his music including the Water and Rock Music series. Two volumes of this series are compiled on Water & Rock Music Volumes 3-4 (FEEDING TUBE RECORDS FTR534) and pressed in vinyl by our American compadres at Feeding Tube, where they are enamoured of his “wistful” qualities. Collin has a very delicate, hesitant playing style, picking out tunes as if uncertain what they mean or where they might lead him. Apart from this halting technique, there’s not much that’s very musically inventive in these simplistic melodies which never stray away from a root chord, but somehow he still manages to weave a faintly compelling pastoral mood. (16/10/2020) I’m finding more musical substance in another acoustic guitar record, Organize Or Die (FEEDING TUBE RECORDS FTR 541LP). This is by the American guitarist Matt Sowell of Minneapolis and might be his first full-length; apparently he caught the attention of the label when he performed at the Thousand Incarnations of the Rose festival in Takoma Park. There’s a coterie of hard-core folk music fans who revere the works of John Fahey and the Takoma label, to the extent that this specialist three-day festival emerged in 2018, dedicated exclusively to keeping alive the flame of “American Primitive” – for such it is now dubbed – in the acoustic guitar. Given this information, it’s perhaps hard not to listen to Sowell’s record through the filter of Fahey, Basho, and Lang, but what I’m feeling on today’s spin is the young player’s determined efforts to find his own voice and carve out a furrow in what might be considered a field already well-tilled by the ploughs of others. One hallmark is the slowness and deliberation of his playing; he follows a tune to the beginning to the end in a very focused manner, as if resolute that he must not make a single mistake; or perhaps, intent that his underlying message must be heard and understood, so no slips in the delivery are permitted. At times, this might give the misleading impression of pedantry, but today I’m finding I prefer someone who works it all out in longhand and sets it down with deliberation and care, rather than the airy sketchiness of a Jon Collin.

Matt Sowell also has a political subtext, expressed in the visual slogan of the LP cover, and in certain tune titles such as ‘Requiem For Democracy’ and ‘No Time For Sittin’, the latter of which feels like it was lifted from a WPA handbook of the 1930s. Robert Wyatt, when he turned pinko, was intent on writing a song that expressed his leftist views in a manner that couldn’t possibly be misunderstood by the listener; the end product of that was ‘Alliance’, which contains stark either-or utterances not unrelated to the 1984 miner’s strike. I wonder if Sowell follows the same credo of simple clarity in his political beliefs; that clarity is certainly present in these well-crafted guitar lines. The label have since released a limited-edition lathe cut, for those who wish to hear more. (16/10/2020)