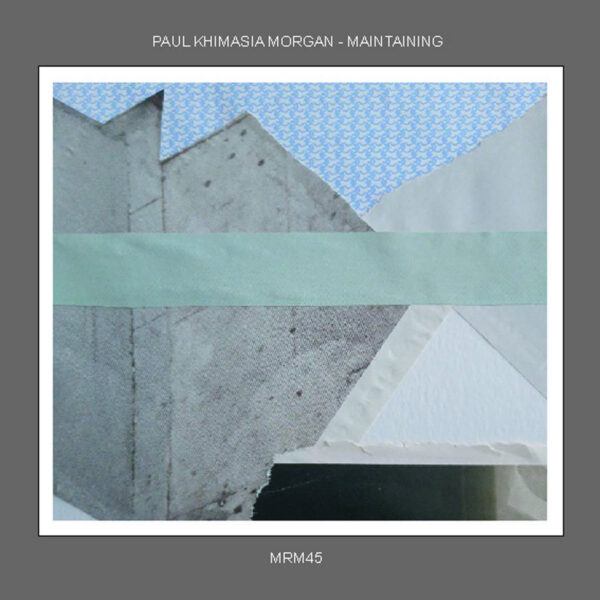 Here Morgan is playing his hollowed-out guitar body set-up, something we have heard a few times in the past, for instance on the 2019 release SU:V22 with Daniel Spicer, but this might be the first time we’ve had a chance to hear him doing it solo. He also, in the press release, provides a little more detail about this unusual instrument – it started life as an Eko Ranger acoustic guitar, but the neck got cracked and he had to remove it. Even here, he seems to be describing the actions of a benign veterinary surgeon rather than a musician. Although this amputation of the neck left him with not much more than an empty sounding-box, he started to perceive it as if it were still a musical instrument.

The more relevant part of the process here is not about recycling (though that’s a good thing to do), nor anything to do with woodwork craft, but the development by Paul of very specific playing techniques and methods which he used to play this empty guitar body. It’s a combination of electronics, percussion, feedback loops – many approaches, all of them deployed in a very subtle and unexpected manner, and evolved over many years, most often in the context of simply playing (with others) and working away at it. Without much foofaraw, Morgan has devised something genuinely new and innovative in the field of that much-contested area, electro-acoustic improvisation. More to the point, he’s still developing and working on it, so it’s not a static dead-end contribution to the culture, but is alive and growing. Of course it is also completely wedded to Paul as a performer. It is thus very good to hear these three lengthy examples of his “guitar body” music, all of which are compelling instances of long-form explorations in a highly unusual sonic environment, with very little of the end result sounding remotely like an acoustic guitar. Indeed on the first cut, he comes close to producing wispy wash effects which wouldn’t be out of place on an album of progressive electronics by Klaus Schulze or Stomu Yamashta. While Maintaining is nothing so vulgar as a “showcase” for all the effects and devices Paul has taught himself, there is considerable variety in the textures, moods and surfaces available, all of which suggesting endless opportunities for further exploration and development.

As such, this album has the power to cleanse the mind and help the listener look afresh at old problems, see new ways of thinking. Exceptional. From 9th March 2021.