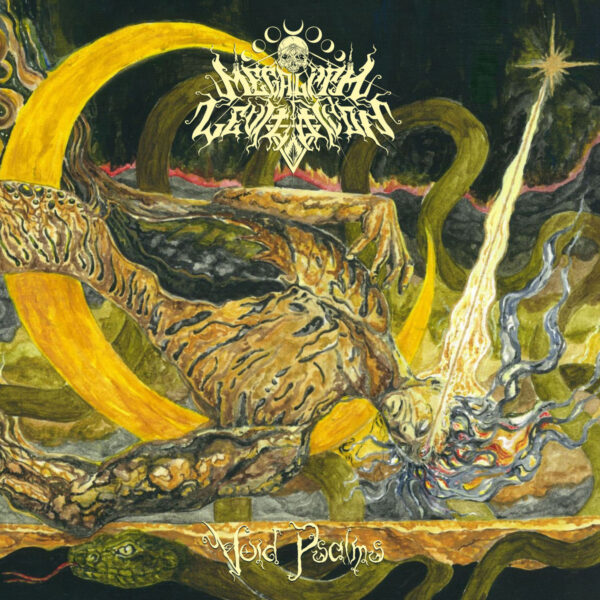 “Phantasmagoric Journey” sets the mood for the album with a droning ritual conducted by high priests seemingly in a trance as they intone a strange liturgy while huge riff chunks drop and crash and spread their fuzz noise through the atmosphere as if in slow motion. The fun starts to pick up in the second half of the track as the guitars take on a venomous oily persona and play an evil melody while background bass wobble effects and drums observe solemnly and keep pace. The tracks that follow have an even heavier, more abrasive sound and the singing, very clear despite appearing to be far off in the distance, is assuming a deranged zombie-like aspect. The music is powered by huge concrete-slab riffs keeping up a slow, steady and relentless pace. It’s not meant to be enjoyable but if the music were sped up, the doom riffs would actually be very headbanging catchy. As on “Phantasmagoric Journey”, the tracks transform about halfway through into very different pieces of music that take listeners into deeper rabbit-holes of dark trance which may feature unearthly melismatic singing, eerie atmosphere, noodling guitar melody and shrieky feedback (“Datura Revelations / Lysergic Phantoms”) or sinister chanting amid snaky guitar howling in an entranced doom metal jam (“Temple of Silence / Pillars of Creation”).

Closing track “Last Vision” is quite a transformation from the rest of the album with an even bleaker ambience, the smell of burning sulphur in the air as the guitars continue to pour out gloopy drone noise grind, and a saxophone solo that brings extra thick smoky pollution over the proceedings.

The trio have a great sound that combines the ethereal and otherworldly in the vocals and atmosphere with thick gritty slabs of burning acid guitar drone. The longer tracks could do with more varied riffing. In its middle section the “Temple of Silence …” pairing seems to lose focus, becoming fragmented and uncertain. Some momentum is lost and the rest of the track feels a bit uneven with slightly lighter doom metal.

What ultimately holds the whole album together, apart from the band’s sound and style, is a vision of apocalyptic darkness for the future of humanity and the cosmos deep in the trance brought about by the music and the moods and atmospheres it generates. This could serve as a model for future full-length recordings, for the band to set out a theme and maintain that over the whole length of the album, and that would allow the musicians space to experiment with their sound and style, bringing in guest musicians from other music scenes and genres to add another dimension to the ML core vision and style.

Megalith Levitation’s sound reminds me very much of British doom / stoner bands like Electric Wizard and Conan, and fans of those bands will feel very much at home with these psych stoner doomsters from beyond the Ural Mountains.