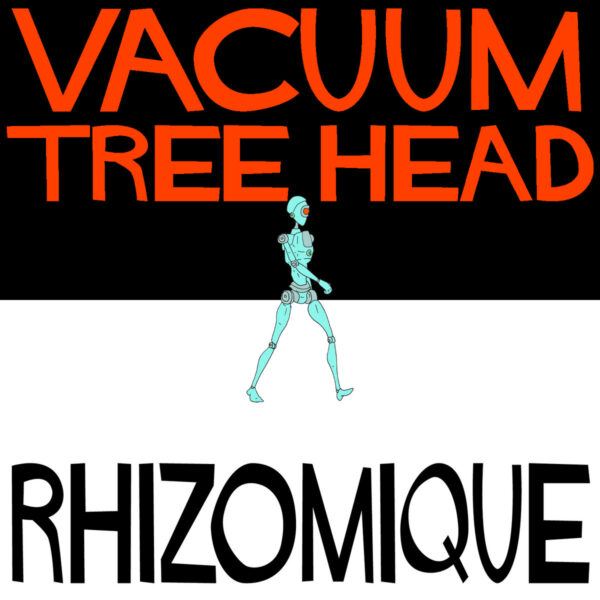 Jason Berry from Oakland CA got in touch to send us a couple of CDs…the item by Vacuum Tree Head is Rhizomique (PEST COLORS MUSIC #42R), with a title and sci-fi theme that Richard Pinhas might approve of. Vacuum Tree Head is Berry and his friend Michael De La Cuesta, and Amanda Chaudhary on keys, though I think Moe! Staiano may have been a member at one stage – I see they made two albums in the 1990s for Megaphone Records, which I never heard, but I do own that Sun Ra tribute record Wavelength Infinity, and they submitted a track to that. This record might be untypical of their music, as there’s a number of highly skilled and well-known guest players here, including Steve Adams from ROVA Saxophone Quartet and guitarist Myles Boisen who has played with Tom Waits and John Zorn. Plus there’s the vocalist Amy X Neuburg, conservatory-trained expert who has sung for Robert Ashley and studied at Mills under Pauline Oliveros. Also woodwinds from Jason Bellenkes, guitars from Richard Corny, drummer Justin Markovits…the ensemble turn in a highly entertaining and polished form of art music like souped-up jazz fusion with additional clever twists, and they make it seem incredibly easy without appearing too slick. Rhizomique was supposed to be an animated science-fiction movie and these songs were intended for the soundtrack; Berry’s story is offered up in a truncated form in the small booklet insert, for which he also did the Moebius-like illustrations. 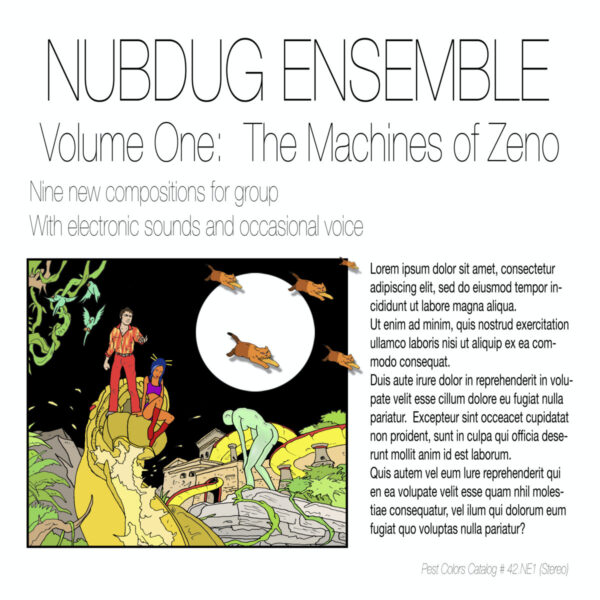 If this item whets your appetite for more by the band, you might be disappointed to learn it’s their last – Berry and de la Cuesta have now “retired” Vacuum Tree Head. However, the other record Volume One: The Machines Of Zeno (PEST COLORS MUSIC #42-NE1) by Nubdug Ensemble includes many of the same players and singers, and since the music is very much a continuation of what we hear on Rhizomique it’s probably fair to assume this represents the general musical direction of Jason Berry. Besides Boisen, Chaudhary, Bellenkes, and Neuburg, we also have the drummer G Calvin Weston who’s played with Ornette, John Lurie, and James Blood Ulmer, and the violinist John Ettiner, plus Paul Hanson on bassoon on a couple of tracks. Again, short and snappy jazz-tinged tracks are the order of the day, though ‘Spicy Mango’ has a flavour of African guitar music in its lilting beat, and ‘Pimento Boots’ has a whimsical lyric and arrangements to match. ‘Logjammin’ might appeal to fans of late-late Frank Zappa, its odd dynamics and dissonances performed so flawlessly it’s as if the band had turned themselves into a human Synclavier. Mostly though The Machines Of Zeno contains luscious instrumentals with much melodic content and invention and watertight arrangements, all composed by Berry sometimes with help from Chaudhary or Boisen. Sometimes West Coast jazz-art music (Gino Robair, Surplus 1980, Club Foot Orchestra) can get a little too clever and wacky for me, but both of these records have found the sweet spot. From 22 March 2021.