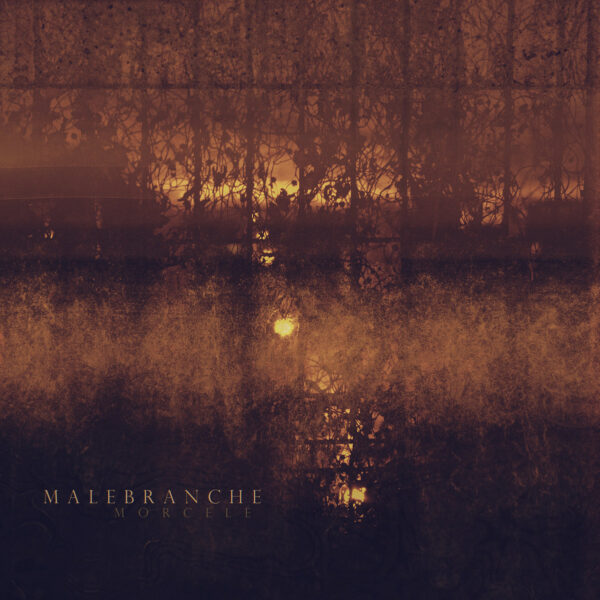 Going past the front cover artwork with its mystery silhouetted branch framework against a glowing sunset without investigating the music was hard if not impossible. I’m glad I gave in to my impulse though. Malebranche is an atmospheric BM / post-BM quartet based in Montreal and though the band has been active since 2014, its output has been sparse with debut album “Morcelé” being released only this month (November 2021). The musicians’ caution in releasing music when they feel it’s ready is a good strategy: “Morcelé” deftly demonstrates their mixing of fast speedy BM from the Quebecois scene with more atmospheric, Cascadian-inspired BM and post-BM elements in songs that have a rich sound and an epic scope. Clear melodies ranging from brooding melancholy to tough aggression, rain-shower riffs, powerful though not overbearing percussion and harsh vocals bursting with rage are present in all songs.

The album opens in grand if melancholy melodic style with “Lente intrusion d’une épine qui ne sortira jamais” (“Slow intrusion of a thorn that will never come out” in Google English) and continues in similar musical style though with a more aggressive mood in “Urgence aveugle, lames glissantes” (“Blind emergency, slippery blades”). Layered with rapid-fire drumming, two sets of tremolo guitar riffs and ragged vocals, the music is dense in harsh yet glowing textures. The melodies probably could be a little clearer to give each track more of a distinct identity (though that probably might not gel with the album’s themes); likewise the vocals need to be more prominent as the music almost drowns out the screaming. “S’usent les trachées” stands out over other tracks by virtue of a slower, more doom-like pace in parts.

The title track tests the band’s ability to sustain a long epic piece of intense emotional drama that sums up previous songs’ exploration of internal psychological conflicts common to all humans that result in angst and prevent us from being whole and at peace with ourselves. Appropriately “Morcelé” is itself fragmented musically that include short passages of solo acoustic guitar music as well as all-out barrelling attacks of sharp-edged noisy guitars. What holds the song together is an increasing emotional tension in the music and especially the vocals leading up to an incredible climax of swirling ethereal ambient music.

A highly atmospheric and lush immersive work, at once harsh shrieking blizzard and yet glowing with an inner warmth, this album’s influences from different BM genres are obvious yet the recording cannot be tied down to any particular genre. While individual songs aren’t very different from one another, they feature some very good melodies and generate strong emotion ranging from melancholy and sorrow to fierce rage. The vocals tend to be shouty and ranting, and need more varied delivery styles. There’s not much here though that needs more than tweaking to bring an already solid and confident style of music to a level capable of delivering a masterpiece album.