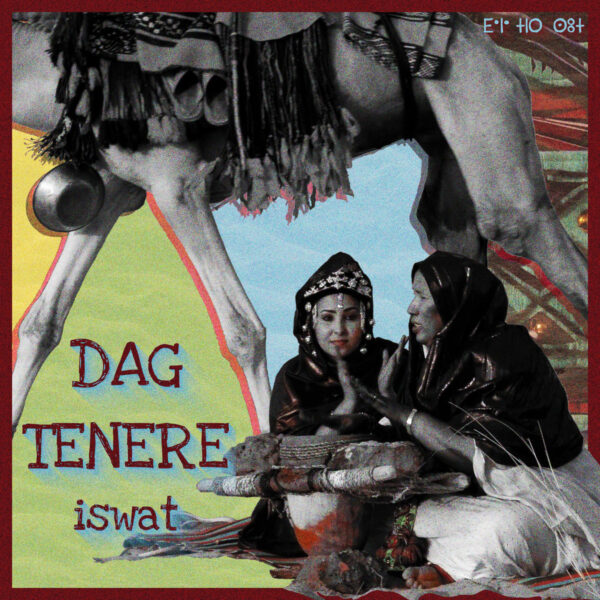 Formed in Niger in 2016, Dag Tenere is a group of several musicians of Tuareg background from Bourkina Faso, Mali and Niger in western Africa playing a hybrid style of blues rock and traditional Tuareg music. Led by guitarists / songwriters Goumar Abdoul Jamil and Ibrahim Ahmed Guita, Dag Tenere released their first album “Timasniwen Tikmawen” independently in 2018 and have followed this up with another independent work, the EP “Iswat”. What the six songs on “Iswat” lack in length – all but one run under four minutes each – they more than make up for in raw, deeply felt emotion through searing dark blues guitar chords and tones that peel off the fretboards and fall like lonely raindrops. Members take turns as lead vocalists, followed by the rest of band as handclapping backing vocalists. While Western stringed instruments like electric guitars and bass dominate, the percussion instruments come from local traditional African music genres and might be djembe drums or calabash gourd drums. (Interestingly, the Tuareg – usually thought of by us Westerners as a wholly nomadic desert people – sometimes partially submerge the calabash drum into water and play it that way to mimic the sound of camels’ hooves.)

On the whole, despite the early tracks being quite startling in their raw desert blues guitar and bass sounds, “Iswat” tends to be a quiet and restrained album with a stark minimalist style. Even the women’s ululations seem quite self-controlled. The songs cover subjects such as the love and respect Tuareg people have for their mothers (“Anna”), love for a beautiful woman (“Tabsit”) and the regret and sorrow Tuareg people feel in having to escape poverty and suffering by leaving the desert and its distinct landscapes, beauty and solitude for the impersonal hustle and bustle of city life (“Tihoussay Tenere”). “Koud Edhaz Emin” is a cover of the Mali-based Tuareg band Tinariwen’s song of the same name and title track “Iswat” is a traditional tune arranged by singer Zaina Aboubacar who plays a tendé drum as well as sing and ululate. Incidentally the title track is dominated by female performers with the men relegated to backing vocals duties.

Dag Tenere might not have the resources that the longer established and better known Tinariwen can command but the Niger-based collective certainly deserves support and encouragement.