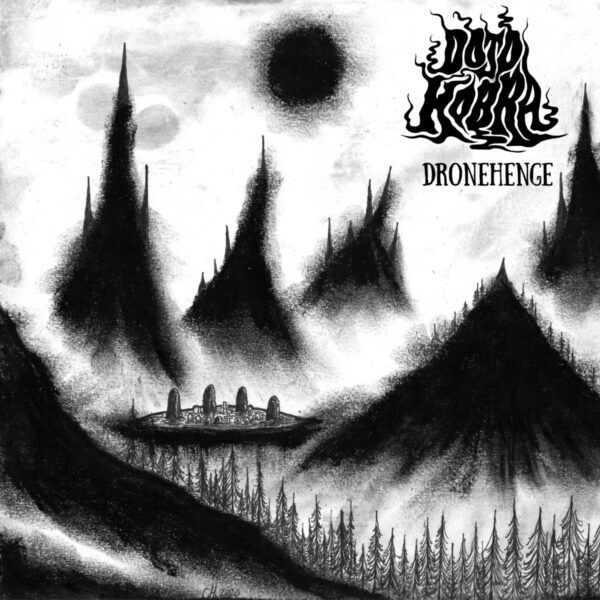 A project originally formed as a duo some years ago by Geoff Coran and Cavan Hooper, both active with their own respective solo projects Primordial Serpent and Hellmoon in the Winnipeg black metal scene, Dojo Kobra is a drone doom noise beast channelling an unimaginably powerful and ghastly subterranean spirit through giant prolonged feedback churn, grinding bass and unearthly vocals. For their fifth album “Dronehenge”, Dojo Kobra have expanded to a trio with guitarist Tim Cleaver, freeing Coran to concentrate on bass and Hooper on guttural groans and banshee screams: a move that might finally garner the trio some attention for their sprawling and unstructured improvisatory style of blackened drone doom.

Opening track “Soul Rot” fair bludgeons listeners with gritty ground-glass bass, slashing doom guitar chords, the most harrowing giant-amphibian growls and ghostly cries, and a sickly nauseous atmosphere of layers of shadowy evil. Background synth does not reassure you with its smooth tones but rather reinforce the sense of looming horror from an unspeakable evil patiently waiting for the right moment to attack … and knowing that the victim’s anxiety is torture enough in itself. A mostly repetitive track, the track makes its impact by sounding like a never-ending introduction to an even mightier and more malignant grinding doom noise opus, at least until it finally erupts in an explosion of crackling noise concrete drone and demonic rage. “Rumors of Dragons” quietly pays more attention to dark atmosphere and the potential for silence to generate its own form of tension, unease and terror for the slight majority of its time before turning into moody ambient noise slumber and finally a psychedelic trance feedback swirl.

“The Druid’s Dance” is quite a departure from the rest of the music in its looping drumming rhythms and repeating piano melody. Clearly listeners are being set up for unbearable punishment in another dimension and this comes in the incredibly bleak and painfully sad closing track “Delirium” which gives the impression of happening in a disturbing throbbing alien dimension where life-forms dissipate into fragments – what could be more horrific than being taken apart atom by atom and being fully conscious of that destruction? In its final few moments the track becomes an unbearably heart-rending lament as even the demons suffer and disintegrate under the pressure of grinding feedback drone and sighing synth wash.

While Dojo Kobra’s massive sound and bleak atmospheres are impressive, I can understand most listeners will find the trio’s brand of sprawling improv very monotonous and often repetitive. The blackened drone doom metal noise textures sometimes seem flat though the flat quality may be a by-product of striving for a bleak noise immersion. Future albums from the Canadian trio will need to include more variety in style, range of sounds and immersive atmospheres if the musicians continue to pursue an improvisatory droning doom noise path.