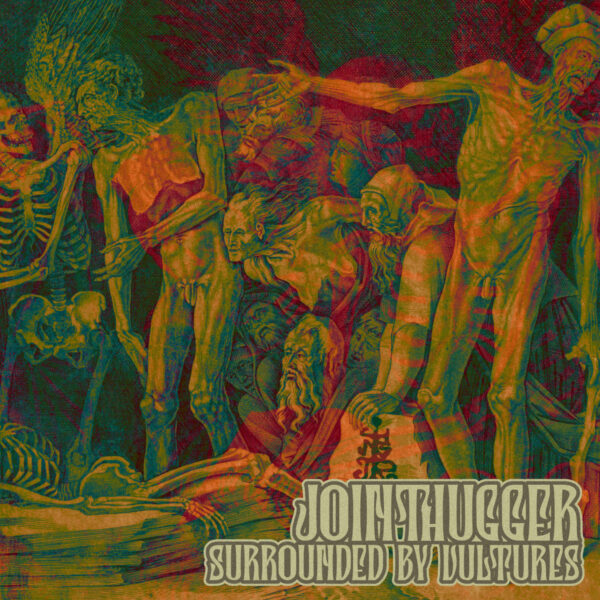 With a name like Jointhugger, these men from Horten in southern Norway might be expected by most to be content singing and playing songs about their favourite herb, exploring what it does for them and how, and perhaps admitting that it also traps them in an endless cycle of pleasure and addiction and acknowledging that it is no real substitute for the things that might be lacking in their lives and the lives of those they know who have also come under the spell of psychoactive drugs. “Surrounded by Vultures”, Jointhugger’s second album, does indeed confront addiction, how alcohol, marijuana and hallucinogenic drugs can affect people and also offer comfort and hope in a world increasingly becoming bleak and dysfunctional – but in its own way, by exploring its particular sonic environment as well as empathising with people battling their personal demons, it also offers another immersive route to a level of comfort and hope.

“Surrounded …” is intended to be part of a trilogy of full-length recordings in which three parts of an overarching instrumental work span over three albums. The second chapter of this instrumental opus “In Dire Need of Fire” is an expansive cosmic psych doom / stoner rock jam, the three musicians wandering where they will across huge regions of deep time and space. Stuttery percussion, low-flying howling drone guitars and deep crushing bass lead the way. It’s not all slow sludge music: later in the track near the end an unknown emergency takes hold of Jointhugger and the trio belt their way down a dizzying dazzling wormhole into another universe. This brings us into “Midnight”, a hugely heavy sludge doom juggernaut where grinding, crushing riffs alternate with delicate guitar melodies and frail vocals influenced by 1960s / 70s hard rock / blues styles. The singing conveys a strong sense of desolation and crying for help while the alternation between hard driving doom and brief moments of very light fragile melodies might mirror the mental state of addicts torn between their need and the prison they are locked in. “Empty Space” is a bluesy track mixing deep bass, fuzzy noise, impassioned lead guitar soloing and darkly brooding atmospheres of alienation and longing.

Every song on the album is different from the rest in its mix of psychedelic, sludge, doom and stoner rock elements: even the style of singing varies from one track to the next though the vocals are rough and limited in range. “Delysid Rex” has a Sabbath influence in its vocals, though most of the song is an instrumental weaving its way through classic hard rock, fuzzy bass solos and occasional crushing doom guitar noise. The album closes with “The Calm” in which hypnotic fuzz bass dominates in a track that zips from fast urgent melodies and crashing cymbals to slow, drowsy passages where time and space almost stand still and the only real thing that matters is the snaking music and guitar feedback.

The first three songs are good and spirited in their delivery but after “Empty Space”, some of the zest peters out and the Jointhugger trio are almost grasping for inspiration in the long instrumental jams where influences like legendary US band Sleep start to become a bit obvious. Jointhugger may have reached a stage in their development where they really need to expand their scope to include much more ambient / atmospheric music elements and music genres outside the well-worn paths associated with doom and stoner rock. What they do here on “Surrounded …” is good robust work but they need to be more adventurous and experimental with their sound and style, and go beyond what other psych doom / stoner rock bands are doing.

The band really excels on the short track “Empty Space” where the mix of fuzzy doom, urban blues and the slight quivering singing match well and create a stark, confronting work of art expressing despair and loneliness – I wish the song had been a bit longer and that there had been at least another song matching it in the creation of a distinct mood, atmosphere and fusion style of doom / blues. For me, “Empty Space” is the highlight of the album and could well be an opportunity for the band to go in a noirish / urban blues direction. Jointhugger have a great sound and a strong muscular style; now they need original material that stretches their talent and abilities.