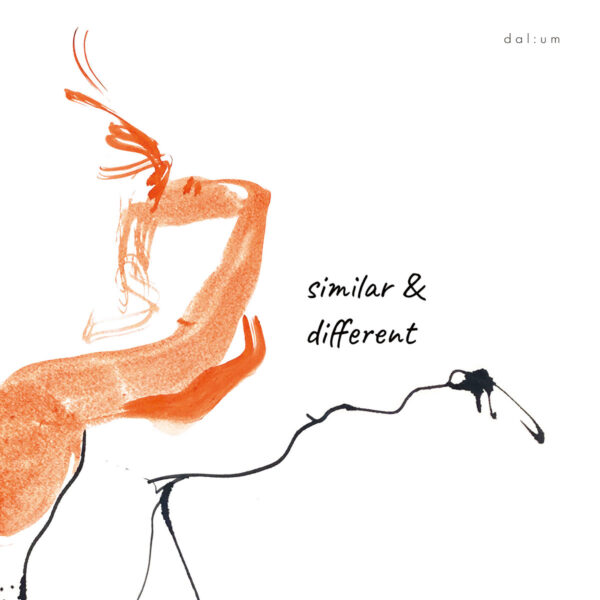 A duo founded in Seoul in 2018 by Ha Suyean and Hwang Hyeyoung, dal:um aims to explore the sonic potentials of traditional Korean music’s best-known stringed instruments, the gayageum (or kayagum as it’s sometimes known) and the geomungo (or hyongum). Both instruments are plucked zithers: the gayageum is a long zither, usually with 12 strings, though modern versions can come with as many as 25 strings, and the geomungo is a fretted bass zither with six to eleven silk strings that is plucked with a bamboo stick. Similar instruments in their basic construction yet because of their size difference, the number of strings they feature and even in the way they may be played, the gayageum and geomungo are different indeed, giving rise to the title chosen by dal:um for its debut album. The conversation of comparison and contrast initiated by juxtaposing these two instruments is mirrored in the two musicians’ respective backgrounds in learning these instruments independently of one another yet desiring to express their own ideas and stories through these zithers, and coming together through their membership of the Seoul Metropolitan Youth Traditional Music Ensemble, which they are still part of.

This album is as sparing in its presentation as can be for a work that explores space and emptiness as much as it does sound. For most of its running time it’s just Ha and Hwang sparring together, sometimes as partners and sometimes as combatants, going for their lives on their zithers and drumming up melodies that can be very excitable. Only the first track “Dasreum” features additional non-stringed instruments in the form of various percussion instruments and even these serve mainly to introduce the zithers which then dominate the rest of the album. On first listen, the zithers can be a bit hard to distinguish from each other especially if you haven’t heard much traditional East Asian music: subsequent hearings reveal that the gayageum and geomungo complement each other in ways similar to guitar and bass, the gayageum having a higher and lighter sound. They can have their distinctive moods: haughty, even arrogant on “TAL”, or wary of each other and sometimes tentative on “Shadow Play”. “Trace” is initially stormy and dramatic but after the fireworks die down the middle of the track becomes pensive before rediscovering its volatility.

For a recording based around two instruments in constant dialogue, and having perhaps the occasional spat, “similar & different” turns out to be a very lively and spirited work bubbling with energy and ideas right up to and including the last track. Each track can be hard to pin down: as soon as you think it’s going in a particular direction, the musicians suddenly turn down a different path and confound all expectations. True, there’s a lot of plucketty-pluck plucking but the vivacity and energy are so infectious, and the passion is so intense, you can be in danger of succumbing totally to the music’s charm and following it all the way to its quiet conclusion.