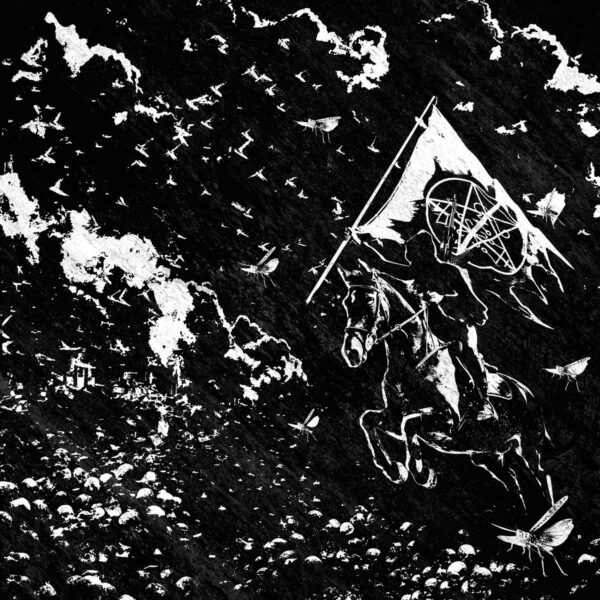 Billed as a Satanic death doom metal duo specialising in themes of Biblical-era apocalyptic war and genocide, Helsinki-based Unsalvation sally forth on their second album “Decimation by Revelation” with bloodthirsty grinding blackened death metal cacophony. Burning acid guitar corrosion, insane drums hammering away at full blast-beat speeds and the most gruesome and horrific monster vocals, both death metal and black metal, with little concern for the niceties of song composition – y’know, concepts like clear melodies that we can all remember and follow, definite beats and rhythms, lyrics we can at least try to follow no matter how indecipherable the singing is – are the order here. The duo’s musical approach centres around deploying death metal structures and conventions in an unstructured, free-flowing style that includes elements from atmospheric BM, industrial and noise to create a frightful and chilling sound universe where Blackness, Chaos and Death reign supreme.

Starting with Track 2, “Incarnation of the Lightbringer” and continuing with “Locust Epiphany”, the death metal songs proper start off as bursts of sudden chaos given some structure by the furious drumming: the guitars churn out continuous meandering drone grind and the voices, usually ghostly in nature, ebb back and forth in the mix as they scream and groan. With “Pestilence and Death of the Firstborn”, some semblance of actual song structure and riffs is present but anything approaching order quickly gets swallowed up in the black chaos. Right across the album also is an incredibly chilly and malevolent atmosphere.

The songs that really distinguish this album are those where Unsalvation leave behind (or almost leave behind) their death metal trappings and dive into sheer noise or the darkest, doomiest ambient music or non-music as it were. Opener “From Hebron to Bethlehem” will have listeners scratching their heads as to whether they’re hearing just a lot of static or anything resembling music at all. At least the track will winnow those unprepared to enter True Sonic Black Hell from those foolish or manic enough to want to follow Unsalvation and dive right in! At another extreme is “Decimation upon Yehudim”, a creepy ambient snapshot of another, very unearthly and darkly sinister dimension coming later in the album. The remaining songs after this track mix industrial chainsaw-guitar noise and monster-cloud-full-of-demons ambience or looping samples of machine noise with death metal blast-beats and crunchy guitar grind, some of which forms actual death metal riffs.

While it lasts, the album is a lot of fun to hear, with the sheer lunacy and energy that went into it. Layers of sonic textures associated with death metal are stretched out and savoured to the full with unexpected effects: the harsh crushing abrasion of death metal guitars turns into industrial-strength corrosion that would rip through a flotilla of 1,000 space-ships in less than the blink of an eye while guttural DM vocals become a Lovecraftian entity too terrible for human imagination to behold. The tracks could have been a bit longer for a more immersive experience and the production could have been improved so that the drumming (which shapes the music) could have been thicker and heavier rather than tinny. Unsalvation might not break much new ground in deconstructing death metal and turning it into noisy industrial death experimentation but they bear close watching from fans of experimental extreme metal if only to see where their eccentric vision takes them.