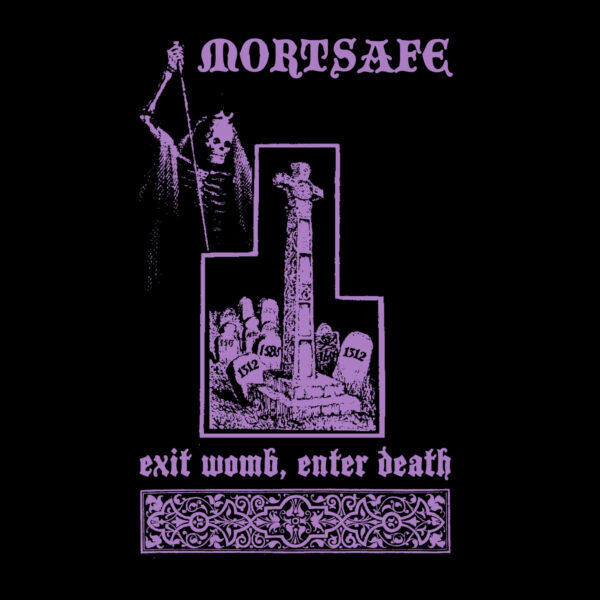 Named after the 19th-century British iron or iron-and-stone cage-like device built over graves to stop grave robberies (back in the days when universities and medical schools resorted to bodysnatching so students could learn human anatomy through dissecting bodies), Mortsafe is a blackened hardcore / punk outfit from Newcastle upon Tyne in North East England. “Exit Womb, Enter Death” – jeez, there’s hardly a gasp between those two traumatic events for an organism – is the outfit’s second release after the equally alarmingly titled debut “Anti-Social Distancing” which came out in April 2020. Somehow Metallica’s “Enter Sandman” song with its lyric of “… exit light, enter night …” pales into gentleness compared to this hard-hitting blackened punk work.

Thankfully as it turns out, the album is split between opener “Exit Womb” and closer “Enter Death” to allow about 20 minutes of life in-between. Both the intro and outro tracks are darkly creepy instrumental noisy near-industrial ambient mini-soundscapes describing a world of decay, darkness, ruin and pervasive evil. Guitar feedback, throbbing synth drone or just an extended sound scene of rumble, lost echoes and what seems to be buzzing flies over a rotting corpse will unnerve listeners. In the middle Mortsafe tears off into a frantic journey of highly melodic grinding blackened punk with some death metal and D-beat influence. Songs can bounce from fast catchy tunes to pounding hardcore music or screechy feedback guitar noise and back again, all presided over by shouty vocals with one fold in the DM camp and the other in hardcore punk.

With the exception of the 7-minute “A Mourning”, most songs are short and packed full of music going from one extreme to another, from fast to slow, from flowing and melodic to jerky with angular crunching riffs, from headbanging groovy to deliberate headache pounding beats and passages. There’ll be openings in the songs to allow the guitar to shoot off and throw down clear definite riffs before the vocals start roaring again and the drums threaten to stomp everyone off the record. A surprisingly tender, even sorrowing moment comes about halfway through “Said and Done” when the music calms right down, the drumming keeps a respectful distance and the guitars start a slow and sedate dance as if in a trance. The pivotal track “A Mourning” is an epic doomy punk work with intriguing layers of thumping percussion, bleeding guitar grind, shrieky drone feedback and a deep vocal filled with pain and suffering.

For 20 minutes the recording packs in energy, vitality, aggression and an uncompromising attitude enough to last most people more than a life-time. Songs are actually well-written beneath the sometimes speedy pace, pounding beats and angry shouting, with most songs featuring clear melodies, many of them actually infectiously danceable. With complex songs, the level of musicianship has to be top-notch great and inspired which it is here. The production is clear enough that all instruments and even very soft background ambient effects can be heard. The softer, more discreet effects add a depth and sophistication to the otherwise Northern hard-bitten BM punk act. There is definitely more to Mortsafe than at first meets the ear and after giving up some of your life hearing out this recording a couple of times, you’ll find yourself curious about and looking forward to a future debut album.

Some of the proceeds of the cassette and digital record sales go towards North East Against Racism, Newcastle Women’s Aid (dedicated to fighting domestic violence) and a not-for-profit DIY music venue / rehearsal space in Newcastle called The Lubber Fiend: all very worthwhile causes!