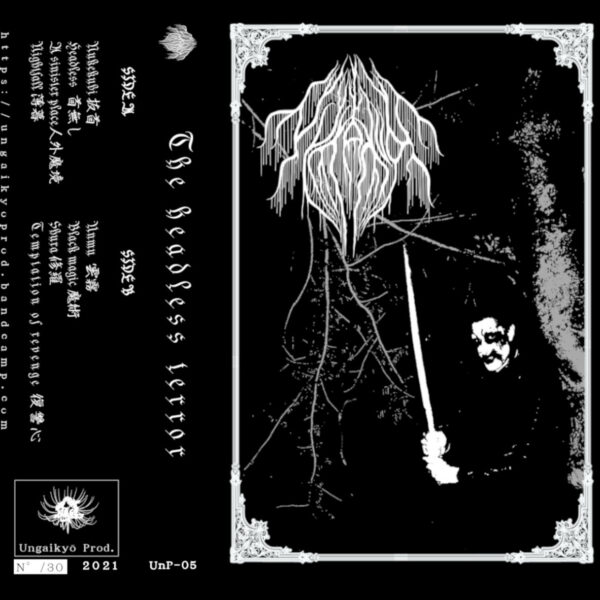 Even by French underground metal standards, this demo by raw BM act Nukekubi is a very singular beast. Nukekubi is the solo project of vocalist / multi-instrumentalist Nobu J who also did the artwork for the cassette release, limited to 30 copies. Nukekubi’s custom is to combine raw atmospheric BM with music inspired by Japanese music traditions: the koto and shakuhachi flute appear on several tracks on this recording. Not surprisingly perhaps, Nukekubi came to the attention of Ungaikyo Prod., a small label which releases dark ambient, dungeon synth and other recordings inspired by Japanese culture and which is run by Julien Lacroix of the dark ambient / experimental / electronic project Moloch Conspiracy. “The Headless Terror”, inspired by a horror ghost story of sinister magic and brutal murder, is the label’s first black metal release. (Even the project name, Nukekubi, is a reference to a type of Japanese ghost whose head detaches from its body and flies around of its own free will.)

While the demo is made up of eight fairly short tracks, the entire work is best appreciated as one continuously flowing piece of music with the shortest of pauses where one track ends and the next begins. The vocals can be regarded as a distinct if very irritable and scratchy sonic layer that adds harshness and severity to a very dark style of hybrid Japanese-styled folk / raw BM / dark ambient; the music effectively becomes instrumental even though strictly speaking it isn’t. The recording starts with a plaintive solo koto melody over foreboding dark ambient drone that warns us of the nearness of ghosts and demons in opener “Nukekubi”. The style of BM is completely dominated by harsh scrabbly tremolo guitars and Nobu J’s crabby deranged vocals: listeners will immediately notice that percussion tends to be smothered over with noisy, hornet-buzzy tremolo guitar fuzz and is a very subservient presence to the rest of the music. Bass guitar is nowhere to be found. An interesting feature on second track “Headless” is the switch between BM and acoustic Japanese-flavoured music as the dominating style, which throws listeners into an unearthly realm where ghosts and demons have all the advantage because this realm is their natural home.

We dive deeper into this intriguing world where the mix of fast raw BM, occasional melodic pure-toned lead guitars, dark ambient and Japanese-themed acoustic music and influences emphasises the dark and stark terror of the demonic forces that had past generations of Japanese people in thrall. Scrabbly tremolo guitars and rasping voices together with lonely solo melodies on koto and breathy shakuhachi in the shadowy background create unforgettable visions of a lonely world, black and threatening, where supernatural forces torment human beings trying to eke a living. The cassette plays as a mini-soundtrack to an imaginary short horror film: while guitar riffs may not be particularly memorable and only really become notable on “Shura” which comes late on the cassette, the music emphasises particular atmospheres and moods, all very bleak and despairing.

An album of much longer and somewhat more structured tracks that would stretch Nobu J’s song composition skills and bring more Japanese folk and maybe even gagaku orchestral music influences into Nukekubi’s style can’t be too far off: though this demo is short, it offers well-constructed and highly evocative music. The visions conjured up are stunning and linger long in the imagination after the recording finishes.