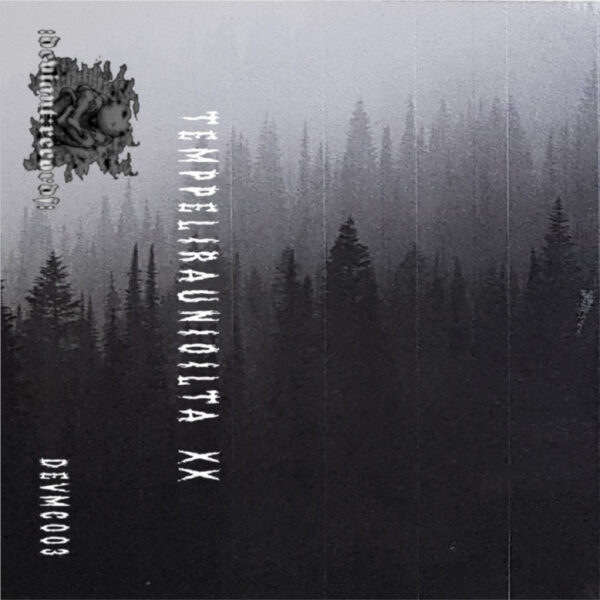 Here comes a truly dark and deranged raw black metal act from Finland with a name impossible for those of us ignorant of the Finnish language to pronounce and a style of black metal expression equally beyond comprehension. Temppeliraunioilta’s modus operandi is to combine aggressive melodic BM with a lo-fi neo-primitive musical approach and a madness matched only by the more batshit oddball acts from the famous French Black Legions scene of the 1990s. Guitars, bass and drums play as if of their own accord and it’s a miracle if they all happen to synchronise their parallel paths into something resembling an actual song, with the result that an actual piece of music always sounds as if it’s in a constant state of collapse. Even the singing is at variance with the music, lurching about as though whoever the mad genius is behind Temppeliraunioilta is in a permanent state of extreme inebriation. Amazingly then that in 2020 Temppeliraunioilta put its one and (so far) only release together, modestly titled “XX”, with eight songs that lurch about in dark drunkenness. Perhaps even more astonishing is that German label Deviant Records saw fit to give the album a physical release so that oddballs outside Finland as well as inside can experience its unique style of punishment.

Though it’s fairly lengthy at nearly 47 minutes, the album is worth hearing in full from start to finish to, uh, appreciate the band’s idiosyncratic approach to songcraft and playing. I do not know if Temppeliraunioilta is a group or a one-man circus but either way, there is actually some very good musicianship on display: the drumming stands out in its own way as technically accomplished if insane, and the guitars travel a fine balance between playing something close to real melody and riffs on the one hand and falling into feedback experimentation and noise on the other. Lead guitar solos, when they appear by accident, often have a very dark dissonant sound that is hypnotic and perhaps familiar to fans of darkly psychedelic Japanese rock acts like Keiji Haino and Fushitsusha. The singing is gravelly deep with rocks grinding hard in the vocalist’s throat.

If you can stand hearing the whole album at least a couple of times, you eventually will be able to pick out particular tracks: some songs seem to be more noise and feedback experimentation than anything else and others have a strong garage psychedelic punk rock feel. On tracks like “Metsä” and “Kuusi” there is plenty of improvisatory jamming with layers of guitars seemingly blasting off non-stop in all directions like a psych guitar Big Bang. The two “Pommijoneet” tracks have a sinister mini-soundtrack feel with long instrumental sections of chainsaw guitar noise feedback, sinuous melodies and percussion thunder over which the vocals stumble and groan. “Keskellä Yötä” features duelling demon voices that sound as if they’re carousing at their local watering hole deep down in the Ninth Circle of Hell while noise guitar burns around them. The purely ambient noise piece “Esirippu” seems to belong to a completely different non-BM band while closing track “Joukkohaudat” brings together an acid psychedelic attitude and downbeat dissonant desert country-and-western.

Musically a very confounding effort that repays repeated hearing if you keep an open mind, “XX” lays on the aggression, the harsh and cold music, and the madness underlying everything in abundance. If there is a major criticism about the recording, it must be that the maniac or maniacs behind “XX” were having too much of a good time creating such an eccentric work with so much enthusiasm and energy! Even though the songs appear not to be very well structured and everything seems disorganised and lackadaisical, the guitars and percussion are actually well restrained and play definite riffs and rhythms. While the album is not for everyone, I found it very enjoyable and even quite funny in parts where (especially in “Keskellä Yötä”) the singing is more silly than demonic. I’m looking forward to hearing more wacky raw BM from Temppeliraunioilta.