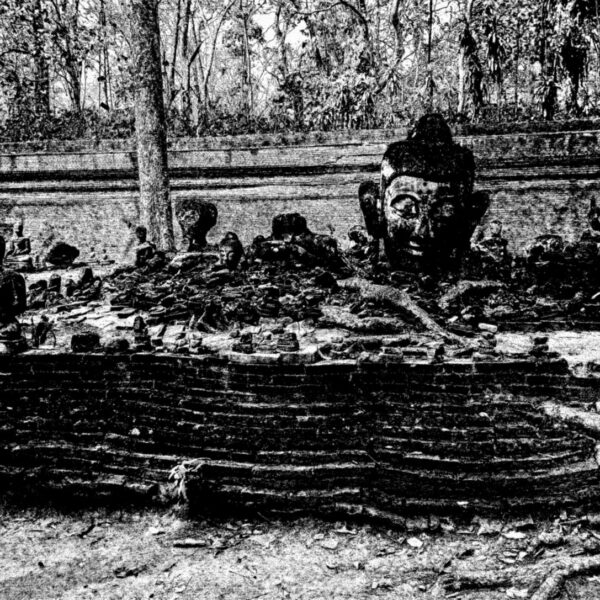 A truly raw and lo-fi solo black metal act, its music brimming over with corrosive hate venom and extreme emotion and aggression, Kanprai must surely hail from the most frigid and desolate wastelands north of Thule where blizzards roar perpetually at hundreds of kilometres per hour … but actually this project comes from Thailand and its second demo tape (which could really pass as the act’s first album) “Bodhisandhya” is as much about exploring and interrogating Buddhist belief and philosophy as it is about darkness, hatred and misanthropy. While the act’s corrosive sizzling guitar noise and sometimes thundering percussion convey intense aggression and emotion, Kanprai relies just as much on strong pointillist melodies and fired-up riffs played at fast speeds to convey his ideas and fury along with his Buddhist themes.

Initially because of the demo’s extreme raw noisy nature, with a spray-jet drone running right through most songs, the songs might all seem very similar in their aggression and moods. After a few spins of the album, the more melodic features in each track start to emerge from the continuous acid-guitar showers. Opening track “The Final Skies” is a mostly doleful instrumental affair cranking up slow guitar melodies and starting up the intense frying noise: in its dark mood, it’s a little reminiscent of some of the old French Black Legions bands (Mutiilation’s “Vampires of Black Imperial Blood” comes to mind). From then on, the songs become much more urgent and highly intense with the drumming punching holes through the skins and the screeching vocals threatening to tear their owner’s throat apart. “Birth of the Nadir” actually boasts some good riff loops beneath all that screaming and the steaming noise drone; after the halfway point when most of the singing has already been done and the percussion relaxes, the guitars truly come into their own with melancholy looping riffs. Likewise “Lotus of Passion” carries on with some very shrill passages of often dissonant and hypnotic tremolo guitar riffs behind the roaring voice.

The rest of the demo follows the same pattern of songs boasting sometimes quite outstanding guitar melodies, dark and moody and sinister in their pacing and twangy tones, beneath the scouring maelstrom. Each song has its own identity and the one song that stands out from the rest is the steady “Sakyamara”, a varied work of much sadness and pain that includes whispered vocals as well as the usual haranguing. Final track “Like Angels Crying For The Sun” sees out the demo with a very defiant and aggressive attitude.

The five songs demonstrate Kanpray’s talent for composing distinct melodies that capture a lot of intense emotion in songs that can end up being complex with new riffs piling upon riffs almost right up to the end. Technical ability and skill are good though as with nearly everything here the noisy guitar drone might be smothering more subtle aspects of Kanpray’s playing and song-writing skill. While songs like “Sakyamara” are very good, there’s always the fear that no matter how many times you listen to these songs, you’ll never quite hear them in all their potential full glory as the droning backing guitars can obscure some of their best features.

A full-length album showcasing even more of Kanpray’s multi-instrumental abilities and the art of writing and playing speedy songs packing in much feeling and mood without the need for fancy-schmancy ambient background effects or studio effects like reverb can’t be too far away.