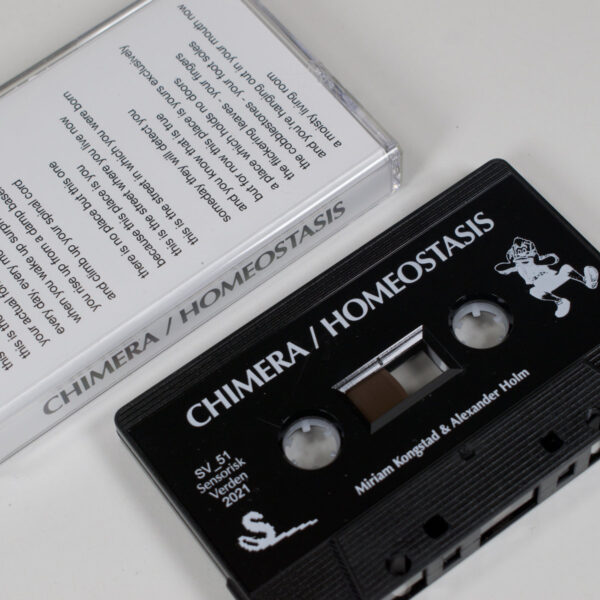 Another baffling release from the Denmark label Sensorisk Verden…this one is a collaboration between Alexander Holm, who happens to be co-manager of the label and a fellow we last heard on the well-meaning but disappointing tape A Limb Between Two Greens; and Miriam Kongstad, a poet, gallery artist, and performance artist who provides the spoken-word element to today’s tape, Chimera / Homeostasis (SENSORISK VERDEN SV_51).

On the first side ‘Chimera’, she speaks with clarity and deliberation as she describes a strange and not-very-pleasant environment, through which we are guided by her words as if we were undertaking a journey; it’s something to do with the human body, architecture, and metaphysics. The sound-art / music element by Holm was created from samples of the harmonica, an instrument which occasionally produces a recognisable toot on ‘Chimera’, but mostly just emanates a cold, alienating, washed-out drone. At best, one feels one is having a strange dream as our discorporated self floats over this lonely and unknown terrain, all the time receiving an ongoing commentary from Kongstad which contains vivid details of what is happening to the body – surreal and unexplained events. It also hints at a rather scary, judgemental subtext, as if we were drifting towards a final reckoning of some sort. At worst, it resembles ‘The Dream-Quest of Unknown Kadath’ or similar delirious state.

The flip side ‘Homeostasis’ contains no spoken-word at all, but is more of the wispy harmonica drone, this time underpinned by a churning tape loop; the aim is to create something hypnotic, and allow a “breathing space”. It is kind of impressive how Holm has started out with an instrument oft-used in blues, rock, folk, song-based and jazz contexts to provide an uplifting and joyous expression of the human voice, and managed to empty it of all passion and feeling, arriving at a chilling abstracted soundscape effect that any cold industrial musician would give their eye-teeth to have created. Equally odd is the cover illustration by Wilfred Wagner, which expresses in visual form the simple joys of harmonica-playing (I think it’s a drawing of Gepetto from Disney’s Pinocchio), and by the simple expedient of recasting it in negative tells us something of the profound transformation that Alexander Holm has wrought.

The whole tape hews closely to its theme of surrealism, sleepwalking and oneiric states, and passes on a very strange distancing emotion. (19/04/2021)