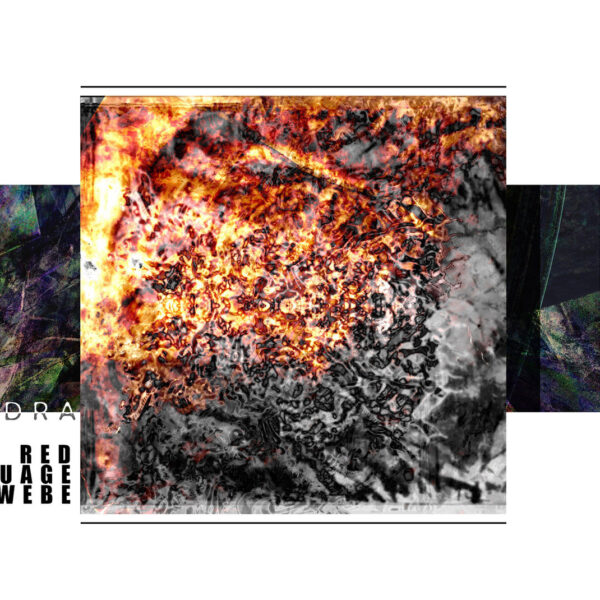 It’s been a while since I heard a record by Das Synthetische Mischgewebe, notwithstanding the recent arrival of the cassette Nisip Noaptea in which he had a hand – yet for a few years we were positively beset with DSM records and related projects, often finding them very challenging listens, and even after publishing an interview with main man Guido Huebner in TSP 22, I wasn’t much wiser. Today however we have an unusual release called The Breath Of The Hydra (ATTENUATION CIRCUIT ACU 1029).

Released on the excellent German label Attenuation Circuit, it’s a rare collaborative effort with Tibetan Red, who is the singular Catalan creator Salvador Francesch (a fellow who was instrumental in securing for us the interview with Victor Nubla, a man now sadly passed). Also joining the party is The Oval Language, who is Klaus-Peter John from Leipzig. From the notes here, I get the impression that Guido and Salvador have a connection dating back to 2016 if not earlier, and have been exchanging epistles (and probably sound files too) during these years. This particular record may have come about after a face-to-face meeting at the LEM Festival in Barcelona. Beyond that, I’m fairly clueless as to how the record got made, and am baffled as to what might be going down on the grooves of this hour-long (59:10) platter.

Broadly, DSM and Tibetan Red could be characterised as electroacoustic composers, though both have followed their own pathways and have taken themselves to pretty extreme places. Tibetan Red has a deep spiritual component to his work that can’t be separated from his sound, and sometimes he makes explicit his interest in rites and ceremonies from religions around the world. He can arrive at very serene, minimal drones, all extraneous materials filtered out; even his use of field recordings is spare and lean. DSM, conversely, is all about performance with physical objects and the unusual sounds they make – at least, I think that’s the case. He too can arrive at very minimal sounds, but the sources are obscured, muffled and disguised, to create events that are so perplexing that to listen to an hour-long CD is like undergoing some form of mental experiment. He has made a very large number of records, Tibetan Red only 5 or 6 in his whole career. As to The Oval Language, I only heard them once on Tapes Singles and Remixes from Monochrome Vision, but they too have collaborated with DSM, and are likewise interested in mysterious aural puzzles.

None of this background info however has quite prepared me for the disconnected jumble we hear on The Breath Of The Hydra. At one level, we can just about hear some signature sounds emerging which allows us to identify individual creators, but on another level the combined effect of the three has – amazingly – produced something quite new, which I assume was the desired result (and hence the title, referring to that many-headed serpent monster from Greek mythology). Restless, surprising, absurd, sometimes even a little violent; the whole work is a series of strange episodes, strung together with a logic which we cannot possibly fathom, a collage where the joins are not visible and a coded message where we cannot decipher the original text. Given that all three are presumably quite strong personalities, and that they certainly have their own hard-won and cherished personal method of working which might be quite far from the approaches of the other two, then this record amounts to something of a heroic feat of endeavour. This isn’t to say it’s especially accessible or easy to listen to, but once you can get past the very extreme abstraction, you are very likely to find a lot of exciting events, textures, and dynamics in this seething cauldron of sound. From 23rd April 2021.