Last heard from Tarab with his Apophenia, one in his designated series “Careful arrangements of sonic rubbish”. New item Holes (SONIC RUBBISH III) follows suit, although not so much concocted from garbage and objects as from specific environments. “All sounds borrowed from various rooms” is pretty much all he’s prepared to tell us. Am I wrong, or is Tarab’s method getting even simpler and more transparent as time goes on? He makes plain his intentions, and hides nothing; what you hear is what you get, and everything ends up on the tape as plain as a pikestaff. I would characterise Holes as bitty and frustrating; tiny fragments of sounds edited together to form a rapid succession of inside-room garbage collage, unknown objects bumping and rattling away. Sonically, the sudden changes in timbre that result from this might be one of the things that interest him. It’s all very broken, very abstract. Unlike other works which have taken a long time to compile, this all appears to be contained within a single year (2020) and involved some sounds he gathered for the Amplify 2020 event. He recycles everything that he can fit in his sack, is my impression, and everything will be upscaled or repurposed into this jumble of audio content. Nice letterpress package is by Ben Owen. (23/04/2021) 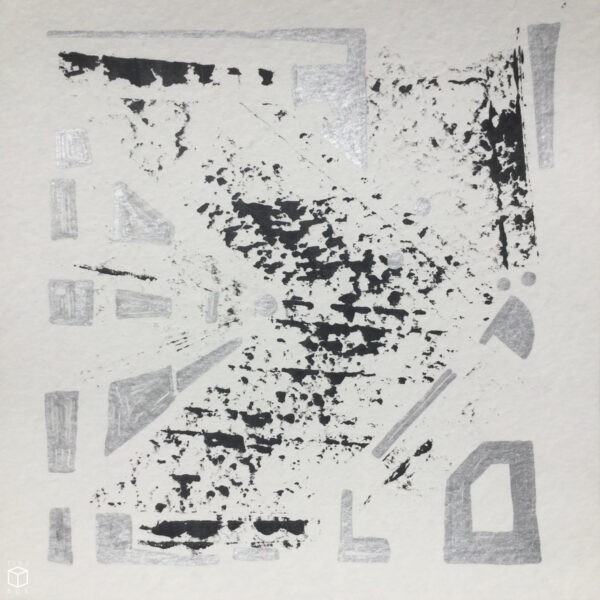 The duo Hanging Freud have been personal favourites here since hearing their Motherland album in 2016. They started out doing their songs with acoustic guitar settings, but around 2019 made the switch to cold synth / dark wave mode, replete with doomy drum machines banging on the door of Fate. Persona Normal (TINY BOX PRODUCTIONS TB13) continues in this vein, with 10 new songs recorded in the period 2018-20, both Paula Borges and Jonathan Skinner doing the programming and playing the synth keys to yield spare, minimal chords in foreboding minor keys, on top of which Borges sings her chilling messages in an implacable tone. Most of these dark-tinged downer cuts are concise and taut, landing well within the proscribed three-minute zone, sharpening their impact thereby. If your tastes have determined that the first two Human League albums are “better” than when that band switched to crowd-pleasing pop-song mode, then you’ll feel at home in these constrictive Hanging Freud frameworks with their tunes as basic and unyielding as prefabricated concrete blocks. I am fairly certain Paula Borges has a vital message for the world, but I wish I could hear more of it; I mean her vocals are somewhat buried in the mix, preventing us from savouring every syllable of her prophetic chants against the evils of the world. With intriguing titles like ‘We Don’t Want To Sleep’, ‘Puzzle’, ‘Immune’, and ‘Antidote’, you can’t blame a guy for wanting to know a little more. The cover art by Romulo Martinz leaves us stranded in a grim environment which might be a ruined cityscape after a nuclear attack. (29/04/2021) 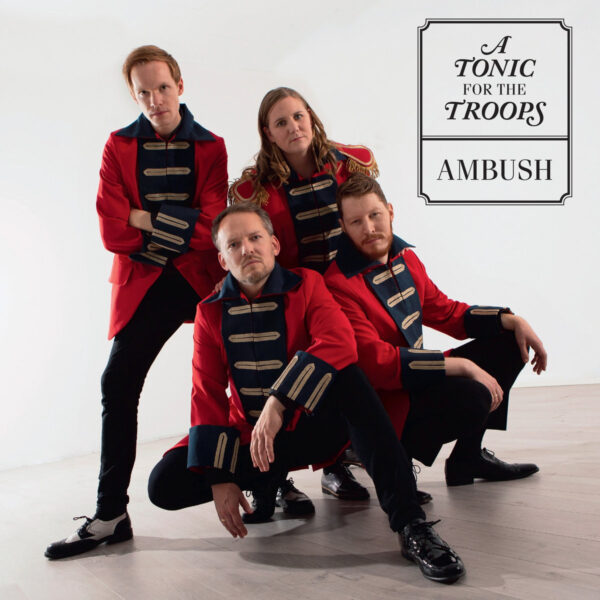 Very enjoyable and accessible jazz from Norway on Ambush (ODIN RECORDS ODINCD9575), produced by new quartet A Tonic For The Troops. As to the name of the group, they express it by wearing these red military jackets as if they’re British soldiers about to engage with the French enemy at the Battle of Waterloo, but it’s also intended to communicate something about the invigorating nature of their exciting movement. The phrase was historically uttered by Winston Churchill, but dates back to the 18th century at least, at a time when the healing properties of quinine (found in tonic water) were something to which any serving member of the British Empire could attest. As to today’s record – Ellen Brekken is the nominal leader, plays the bass, and composed all the tunes, proving she has made her way up the ranks since playing in the Hedvig Mollestad Trio who made a number of records for the Rune Grammofon label. Adept she be in several modes, notably the fast, melodic and upbeat tunes such ‘Oxford Suite’, ‘Ambush’ and ‘The Capitulation of Alexandria’, or the more contemplative slow ballads such as ‘Blue Nile’ and ‘Marc’s Lament’. All these pieces show a firm grasp of melody and development, and are through-composed to the extent that there’s very little by way of meandering or water-treading from the band, who execute the required moves with a precision that Mingus (I make so bold a claim) would have recognised. Saxophonist Magnus Bakken is very able at carrying off the top lines in a convincing manner, though for me personally he gets a little sentimental at times on the ballads, over-sweetening the emotions. At the same time, he lacks the attack that would give a sharp piece like ‘Ambush’ that shade more bite and ferocity. For me, it’s the pianist Espen Berg who’s the band’s real secret weapon, delivering crisp runs and understated chords with the delicacy of a Bill Evans. He also shines on ‘The Capitulation of Alexandria’, hammering out his emphatic block-chords with the skill of a jeweller cutting a diamond. An exciting debut record, brimming with talent and enthusiasm. (13/04/2021)