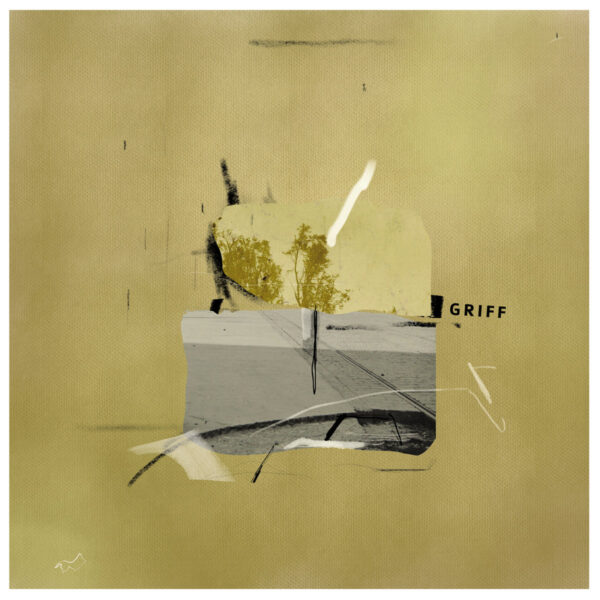 Austrian pianist Ingrid Schmoliner has shown up in these pages a few times since 2014, for instance as part of improvising trio Para, and on the rather stern Dwarves Suite record for Corvo Records. On today’s CD GRIFF (INEXHAUSTIBLE EDITIONS ie-025) she is one-third of GRIFF along with Danish player Adam Pultz Melbye on the double bass and Emilio Gordoa (from Mexico City) on the vibraphone, performing their own very distinctive brand of all-acoustic music.

Ingrid Schmoliner has tended to project a slightly foreboding vibe on previous outings, even on the Nabelóse record which supposedly had a compassionate subtext about exiles and alienation. Certainly opening track here ‘But Still’ is enough to terrify the unwary, with its implacable and slow progression through dark chords, each musical statement pencilled in with strong, minimal strokes, each gesture like the blow of a judge’s gavel on the desk as they’re about to pass a death sentence. The combination of piano, bass and vibes is utterly inspired, each instrument shining like a sheet of cold silver in a dark sky, but the planned dissonances and enigmatic mood are pretty tough going. 15 and one-half minutes pass with the same sense of dread as a patient sitting in a cancer ward, expecting to hear the worst.

On ‘From Real’, I’m hearing in the bell-like sounds a deathly precision and careful attention to note-placement that somehow manages to “frame” and emphasise the space and silence sitting on either side of the notes; once again, the tension is formidable. As two percussion instruments write out our doom one letter at a time, Melbye’s bass groans and purrs with a sadistic delight. The uncanny tune ‘Bell Skin’ does something to vary the texture with its slightly more uptempo pace, and a concern with generating more resonant blankets of sound and continual murmurs instead of the stark, stand-alone utterances, but the mood remains remorselessly severe. With these clipped two-word tune titles, I’m starting to imagine these are excerpts from a black magic spell, and witch’s cauldron ingredients like ‘Moss Rock’ and ‘Bell Skin’ don’t do much to dissuade me. ‘Moss Rock’ is another uptempo “rocker”, and it’s possible Schmoliner has dampened her strings to produce this deadened percussive effect that sounds like a set of steel pans from Hell…and Melbye has now discovered how to make his instrument creak like the timbers of an ancient schooner, such that this track makes sense as a Voyage of the Damned story.

There’s a vinyl edition of this scarifier, but the CD has a hidden track called ‘Which Itch’ (a pun confirming my fears about the witchcraft themes), where the trio return to their brooding state and play one long decaying chord after another, savouring the sense of utter futility. Andrew Choate has provided a textual note inside, but it doesn’t explain much with its free-associative wordplay and obscure references to “an angel made of water lighting candles” and “the parabola of the vital thwack of life”. Likewise, Lena Czerniawska’s abstract artworks on all six panels of the digipak are hard to fathom. Everything about this release is a real enigma. RIYL the Milt Jackson / Mal Waldron Embalmed Corpse LP (Blue Note BLP 1674546, 1965) or the short-lived Morton Feldman “ambient death” experiments from around 1970. Also anything from the burgeoning Witch-Recipe genre, an interesting Black Metal splinter genre. From 28th April 2021.