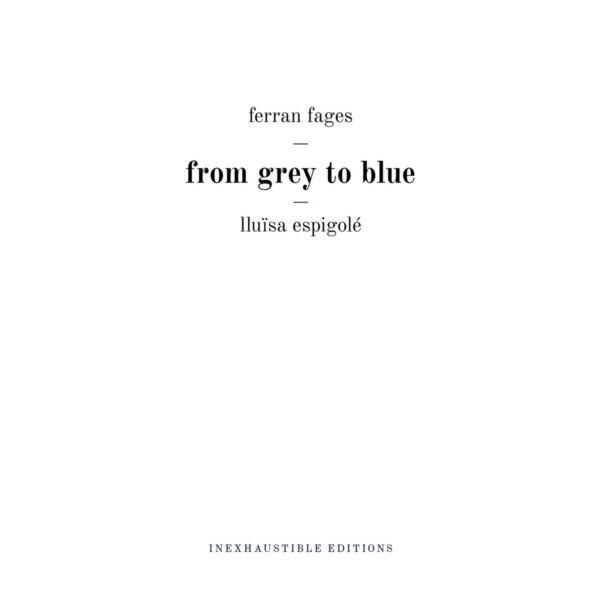 Ferran Fages is the excellent Spanish fellow from Barcelona whose diverse work appears here every so often, most recently in 2018 as part of the trio Phicus, but it was the Atolón record from 2004 which continues to be a personal benchmark for my mouldy lugs, made with Alfredo Costa Monteiro and Ruth Barberan. Their dry and highly severe take on acoustic improvisation left a taste in mouth as palpable as a diet of dusty twigs. Fages played the “acoustic turntable” on that pivotal item, which I always assumed was either a hand-cranked victrola, or a modern turntable that wasn’t plugged in.

Well, over time our man has evolved into a composer, and in 2018 he released examples of his composerly craft for both Another Timbre and Edition Wandelweiser, which I mention as it could give you a signpost as to the stars that guide his chosen aesthetic sailing ship. His From Grey To Blue (INEXHAUSTIBLE EDITIONS ie-032), in my hands today, was played by Lluïsa Espigolé, a very determined modernist whose repertoire favours composers from the 20th and 21st centuries, and who also engages with multi-media performances, electronics, video, prepared piano, somehow finding time to occupy the professor chair of contemporary piano and chamber music at the University Of Music in Zaragoza. Today’s work, structured in three parts, was composed in 2018 but Fages indicates that the collaboration with Espigolé was going on for two years before that, so the deep resonances of the music have evidently had a long gestation period, and what emerges from the slow and deliberate tones is something very distilled. Ferran Fages seems to have become fixated on the idea of a single musical event, that of a note decaying and fading away. In that near-microscopic happening, he seems to perceive grand truths about the nature of the universe.

The pianist here has the impossible task of “capturing that which is left in suspense”, called upon to enter into a dialogue with the idea of resonance itself. Any emotion or movement in the performance mus be checked in at the cloakroom; as she sculpts this fragile “presence” from thin air, the listener’s expectations are either slowed down to a glacial rate, or dispensed with completely. Phew. Not even Samuel Beckett would have given such severe, hard-to-follow instructions to an actor appearing in his absurd dramas. To cap it all, we’ve a very poignant printed quote here about the nature of “nothingness” from Carles Camps Mundo, the experimental Catalan poet who sometimes deigned to use language, but is also known as a concrete / visual poet. He seemed to be one who has an absolute horror both of silence; and of words; what else can we make of the lament that speaks of “carnivorous muteness” and “That powerful silence that annoys me”?

Summa, this delicate piece of music may seem to have one or two of the Wandelweiser hallmarks that dog my life so much, yet we have to admire the purity of Fages and his vision, and the remarkable poise and elegance – some might call it superhuman restraint – exhibited by pianist Lluïsa Espigolé as these eerie, half-alive notes emanate stiffly from the other side, hang in the air mysteriously, and fade away like spectres. From 28th April 2021.